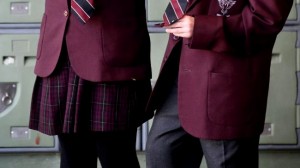 A New South Wales primary school has come under fire after it banned girls from wearing shorts as part of the school uniform, only allowing them to wear dresses.

Parents of students at Bathurst Primary School were unhappy when the school updated its uniform policy, removing the option of navy shorts and a white polo shirt for girls, making the blue, white and grey check summer tunic mandatory.

The school’s principal, Kate White, told the Western Advocate that some girls had ‘become competitive over brand-name shorts’ and were wearing the shorts ‘inappropriately.’

However, many disagree with this decision. Parents of girls at Bathurst Primary have complained that it is blatant and needless gender stereotyping, forcing girls to wear the dress even if they do not identify with that kind of gender identity. A parent of a girl, recently enrolled at the school, having moved from the US, exclaimed that ‘we’ve moved to Australia and it’s the ’50s still!’

Bern Morley, for Mamamia, argues that by making dresses mandatory for girls, the school not only reinforces gender binarism, but also inhibits girls’ abilities to engage in active play. While boys may be free to jump, leap and climb, girls may be made to feel self-conscious about doing such activities while wearing a dress. Because knickers. In a culture that places shame/blame around bodies and sexuality disproportionately upon women, stereotypical gender socialisation such as this may reinforce inequitable gender roles in which men are active and women are passive.

While girls have been wearing dresses and skirts for a long time without this impeding too much on what they want to do, and sometimes ‘in the real world’ you just have to wear that damn uniform even if you don’t feel comfortable, this issue raises much debate over how much influence institutions should have on gender performance, particularly for young people.