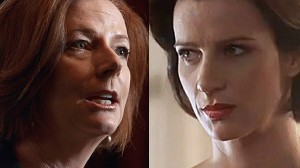 First, she was Rhonda Epinstall alongside Toni Colette in the hilarious and iconic Muriel’s Wedding. Then she was the strong, passionate Brenda Chenowith in the brilliant HBO series Six Feet Under. Most recently, she’s been Christine Assange in Underground: The Julian Assange Story aired on Australian commercial television late last year; as well as Duclie Boling in the ABC’s miniseries Paper Giants: Magazine Wars.

And now, she’s set to take on a whole new level of awesome when she becomes Australia’s first female Prime Minister, Julia Gillard, in an upcoming Australian television drama.

Just in case you haven’t already guessed, this writer is something of a huge fan of Rachel Griffiths.

This upcoming series is expected to air on Australian televisions in 2015, and is based on Kerry Anne Walsh’s book The Stalking of Julia Gillard. Melbourne production company WTFN has acquired the film and television rights to the book, with Richard Keddie as the producer. Keddie’s previous works include bio-dramas Hawke and Curtin.

Walsh’s book details the rise and fall of Gillard, the political resurrection of Kevin Rudd, as well as providing an examination into the role the media played in Gillard’s downfall; so needless to say, if it is done well, it will make for compelling and enlightening viewing. Keddie has also directed political advertisements featuring Gillard and Rudd; and he describes the Rudd-Gillard leadership battle as ‘an incredible contemporary Australian story.’

Griffiths has issued a statement expressing her anticipation and delight at her selection of being named to play Gillard:

‘I am thrilled to portray Australia’s first female Prime Minister and explore the private aspects of her remarkable term…I believe that the creative and intellectual capacity of the team involved will produce a stunning drama that will reframe this historic period in our cultural and political life.’

4 thoughts on “in brief: rachel griffiths to portray julia gillard in tv drama”