in brief: record number of women in cabinet 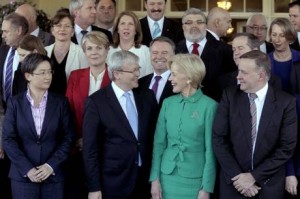 Image via The Independent

Last week’s successful leadership spill was bad news for Julia Gillard. For the rest of the women in the Labor party though, there is something worth celebrating.

The Prime Minister was quick to deny that the increase was an attempt to stem outrage at Julia Gillard’s demise.

However, some have been quick to point out that while this could be seen as a win for feminists, over 55 years of experience has been lost from cabinet due to the resignation of experienced ministers.

And while there has been an increase in the number of women, men still hold the top jobs. The notable exception, of course, is Penny Wong – who has been promoted to leader of the Senate.