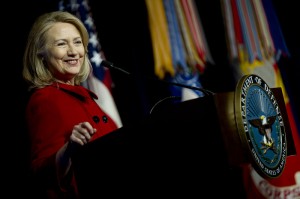 In the lead-up to the 2016 presidential election, an anti-Hillary Clinton group called The Hillary Project has featured on its website a game in which people are encouraged to deliver a virtual slap across the face to an animated image of Hillary Clinton.

Alongside another game called Dancing Hillary, SlapHillary allows the user to play an audio clip of Clinton speaking before choosing to slap her with either a left or right hand, causing her head to wobble and eyes to roll absurdly. In the past few days The Hillary Project has bombarded reporters with links to the game via Twitter, with the line ‘Have you slapped Hillary today?’

Despite its recent appearance, author Richard Poe points out, the game was created in 2000 by film-maker and animation producer, Marie Poe (Richard’ husband), under the auspices of David Horowitz’s Centre for the Study of Popular Culture, now the David Horowitz Freedom Centre, an ultra-conservative and anti-Islamist group that aims to combat what it sees as the political indoctrination of students by ‘the Left’.

On its website The Hillary Project claims to be a non-partisan advocacy group, whose single goal is to wage war on Clinton’s image. According to the group’s Federal Election Commission paperwork, the organisation’s treasurer is Christopher M. Marston, a campaign finance consultant for the Republican Party and a former member of the George W. Bush administration.

US laws allow independent Political Action Committees (PAC) to source unlimited donations from individuals, unions, corporations, and other organisations for the purpose of political advertising and campaigning as long as they do not contribute directly to any political party’s campaigns, which are subject to donation limits and disclosure requirements.

The Hillary Project appears to be currently focusing purely on social networking and online activity, with hundreds of tweets and Facebook posts being made since the end of June. The hashtag #slaphillary is associated with this game in particular.

At the time of writing only 24 people had liked the official Hillary Project Facebook page.