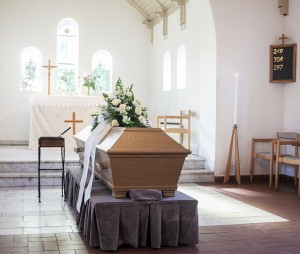 A Polish coffin company has taken the objectification of women in advertising to a new level by producing a calendar of nudes. And coffins…

Lindner’s 2014 calendar is the fifth in its annual collection, featuring scantily clad women, draping themselves over luxury coffins.

The family owned business claims that the calendar shows off the ‘the beauty of Polish girls and the beauty of our coffins.’ Owner, Zbigniew Lindner describes the venture as only ‘half serious,’ although the company are now making a whopping 11,000 caskets a month.

‘We wanted to show a coffin shouldn’t be a sacred object – it’s furniture, the last bed you’ll ever sleep in.’

The controversial calendars sell for $50 each, with 100% of the money made going to charity. But some are still unnerved by the images. Lindner have come under fire from the Polish Catholic Church, who believe that death and sex should not mix. The church condemned the previous calendar and have continued to label it as ‘inappropriate.’

Lindner, however, continue to defend the images. As the largest manufacturers of coffins in Poland, they claim to be trying to lighten up the ‘serious attitude’ towards buying a casket. Lindner stated that the 2014 calendar aims to express the ‘perfect harmony between Lindner coffins and natural wood, blue sea, red flowers, green fields and beauty of the female body.’

One thought on “in brief: sex sells…coffins”