in brief: sheryl sandberg and other well known feminists want to ban the word ‘bossy’ 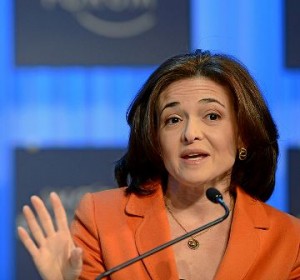 Facebook COO, Sheryl Sandberg, has recruited some well-known friends and feminists to take aim at the way the word ‘bossy’ is used to describe women.

Sandberg’s Ban Bossy campaign features friends like Beyoncé, Condolezza Rice and Jennifer Gargner, urging people not to describe girls and women as ‘bossy’ in a negative light, and instead commend them for displaying ‘executive leadership skills.’

The launch of the campaign marks one year since the release of Sandberg’s best-selling book, Lean In, a manual for women in the work force, in which she describes her own experiences being told to ‘pipe down’ because of her gender.

Sandberg believes the negative connotation of describing females as ‘bossy’ creates a mindset for younger girls who hear the word, and decide not to take on leadership roles.

‘By middle school, girls are less interested in leadership than boys and that’s because they’re worried about being labeled bossy,’ she said.

The hashtag #banbossy is currently trending on Facebook and Twitter, and the video that accompanies the campaign features many influential women listing words like ‘bossy’ that have been used to describe them in the past, from ‘pushy’ to ‘stubborn.’

Sandberg said, ‘the next time you have the urge to call your little girl bossy? Take a deep breath and praise her leadership skills instead.’

One thought on “in brief: sheryl sandberg and other well known feminists want to ban the word ‘bossy’”