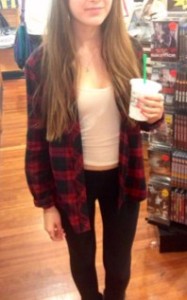 On the 16th of June, the 15-year-old daughter of Boing Boing creators Mark Frauenfelder and Carla Sinclair was travelling with a group of high school students on college tour when a TSA officer at LAX started glaring at her.  In text messages to her parents, she said that the officer began mumbling at her, and she said, ‘Excuse me?’  In response, he bellowed, ‘You’re only fifteen, COVER YOURSELF!’

While a photo of the girl is attached to the original article written by her father, Frauenfelder is quick to point out that his daughter’s outfit is of no consequence to the story.  Whether or not she was wearing a bikini or a burqa, it is not appropriate for anyone – especially not someone in a position of power – to tell another human being what to wear.  As Maureen Harman, friend of Frauenfelder and Sinclair, and co-founder of A is For, a women’s rights advocacy group, has put it, ‘“Cover up” is a dangerous cultural attitude that fuels more than rude comments.  It’s the foundation of the oppression of women, rape culture (“she was asking for it”), and the drive for reproductive control of women’s bodies.’

While Frauenfelder and Sinclair have been promised by a supervising officer at LAX that an incident report has been filed, and that they are taking the incident seriously, the comment still remains a prime example of how the desire to control women’s bodies pervades Western culture. Hopefully, the worldwide coverage that the incident is receiving will make some people think before they speak to condemn a woman for the clothes she wears.