in brief: women told to avoid junk food during pregnancy 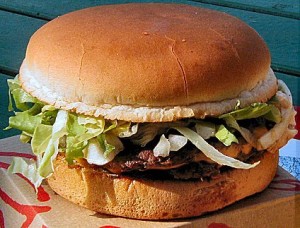 A South Australian study has found that expectant mothers who consume a diet high in junk food are more likely to give birth to children with a predisposition to junk food addiction. University of Adelaide researchers claim pregnant women are programming their unborn babies to be addicted to high-fat and high-sugar diets for life if they over-consume unhealthy foods during pregnancy.

The two-year study involving rats found that children whose mother’s consumed high-fat and high-sugar diets had less sensitive opioid signalling pathways than mothers eating a more healthy and balanced diet. Researchers claim children born with these less sensitive pathways would always require more fat and sugar in their diet than other children to experience the same pleasurable feelings associated with consuming high fat and sugar foods as it would be harder to stimulate production of the ‘feel good’ hormone, dopamine. This predisposition to consuming larger quantities of unhealthy foods is said to be irreversible and would carry on into adulthood.

Dr Bev Muhlhausler, Postdoctoral Fellow in The Univeristy of Adelaide’s FOODplus Research Centre,  likened the junk food addiction created by unhealthy eating during pregnancy to an opioid dependency: ‘In the same way that someone addicted to opioid drugs has to consume more of the drug over time to achieve the same ‘high’, continually producing excess opioids by eating too much junk food results in the need to consume more foods full of fat and sugar to get the same pleasurable sensation’.

The study follows significant media coverage of high-profile celebrity women subjected to public criticism of their lifestyle choices while pregnant. Last year, media personality Chrissie Swan was publicly shamed when a photographer snapped her smoking in her car. More recently, a pregnant Kim Kardashian has been criticised in tabloids around the globe because of her changing (pregnant) body.