in brief: women who eat on tubes fight back 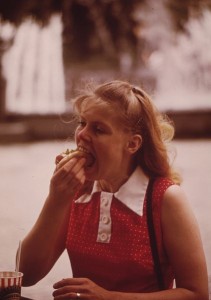 Facebook is well known for it’s many bizarre and inappropriate pages, but a new page, developed by a man in the UK, has sparked controversy and even protests.

The page in question is titled ‘Women Who Eat on Tubes,’ encouraging members to post pictures of women eating whilst on the tube and then writing derogative comments to accompany the images, most of which are taken without the women’s knowledge and consent.

Tony Burke, filmmaker and artist first funded the page in 2011. The page has gone under the radar until now, with a strong support of over 20,000 people it is no longer, as Burke put it, a ‘small observational study’.

Just read the description given by Burke and you get a sense that this isn’t merely an innocent study, but more of a demoralising and just plain creepy study of women eating. Not to mention the abuse from users that accompanies the photographs, likening women to animals, notably pigs, all just for eating in public.

Burke can’t seem to grasp what he has done wrong here. OK, Yes, legally, you can take pictures of people in public, but encouraging others to insult and shame them is inappropriate and harmful.

Fortunately the British Transport Police are offering help and have informed women to approach them if they feel threatened.

But even more encouraging are the women who are protesting and standing up for their rights. Hundreds of women are reported to be cleverly staging a protest picnic on Monday.