In celebrity news… Jennifer Lawrence continues to lead the way, penning an open letter titled Why do I make less than my male co-stars? in which she nails the double standard of bossy women/strong men at the Hollywood negotiating table. The letter was written in light of the Sony Hack that revealed how just how much more her male co-stars make than her, which is a lot. Go get ‘em JLaw.

In more of that hot celeb gossip making the world go round…Rapper Tyler, the Creator has released a new song in reaction to his recent rejection from Australia at the hands of activist group Collective Shout. The somewhat aptly titled Fuck It questions his misogynist and homophobic status, and includes jokes about sneaking into Australia with a microphone and vegetables. If nothing else, it will make for an interesting episode of Border Security.

Depending on where you stand you can listen to the new track here, or read about the campaign here.

Speaking of which…Today, the NSW govt sent a strong message against domestic violence, pledging a $60 million campaign targeting perpetrators and re-offenders. The money will also fund further emergency accommodation for families, which, while beneficial, should be viewed in light of last year’s Going Home, Staying Home reform which saw women’s emergency shelters merged with homeless shelters.

In literary news…Jamaican author Marlon James has won the Man Booker Prize for A Brief History of Seven Killings. This is the second year the Prize has been open to authors outside of the United Kingdom, making it the first win by a Jamaican author. The novel is a brutal fictional account of an attempt on Bob Marley’s life, steeped in the social mores of 1970s Jamaica. He joins a long list of awesome writers/people, including low-key Australian writer Richard Flanagan and literary giver-of-wisdom Hilary Mantel.

In world news…A report on global inequality by Credit Suisse explains that half of the world’s wealth is now owned by the 1% (which, FYI, two people in this news round-up are members of). The report shows the rich are getting richer, particularly in the UK and China where the middle class is growing fastest. Meanwhile, almost 70% of the population have less than $10,000 USD in income and assets. Concerned by the growing schism between rich and poor? Well, you know what to do: 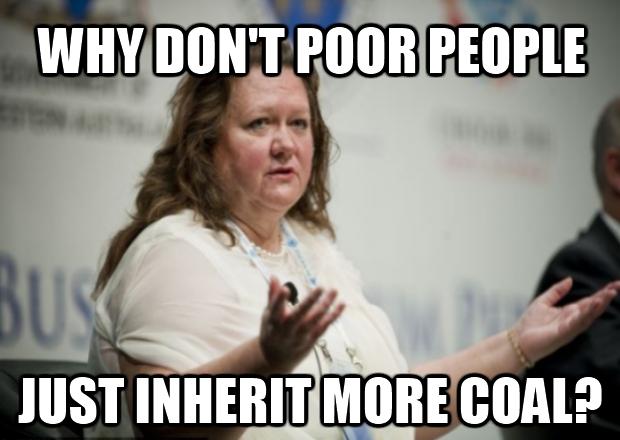 And over to sports…proving that no woman in the public eye can escape the scrutiny of objectification, Cosmopolitan have managed to take some offhand comments about food and turn it into an article on What Ronda Rousey Eats In a Day. Here’s a hint: it’s food. Bye now, Cosmo.