in brief: vote 1 for women 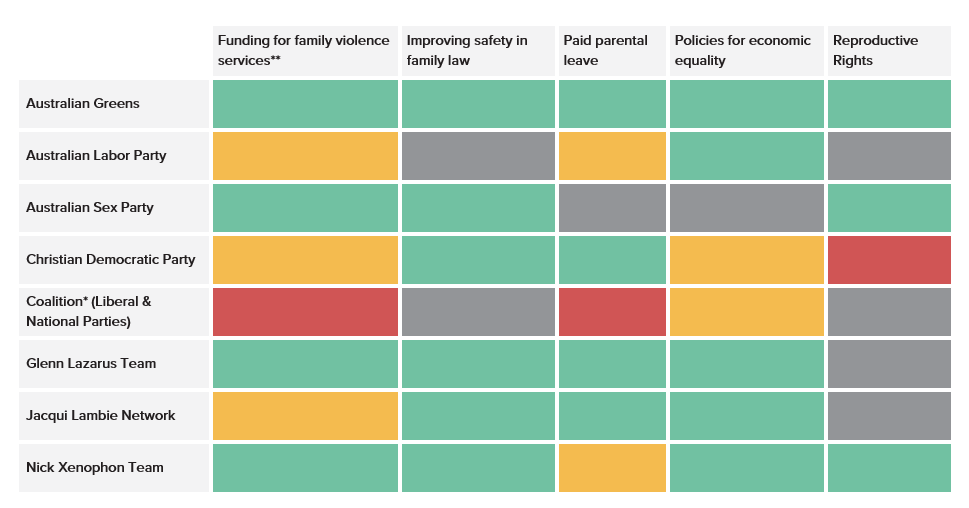 Campaign 2016 closes up for Australia’s political hopefuls in just two days. Recent research based on Twitter users suggests young people and women are the group most undecided – or more aptly, weighing up their options – about how to exercise their democratic right. As the federal election’s vote grows nearer, sometimes a second opinion can help give clarity on where our vote is really going.

To assist in deliberations, Fair Agenda have released their scorecard for the major (and some more notable) political parties contesting seats in the House of Representatives and Senate this Saturday, delving into their commitment to women’s issues. Their analytical tool brings the parties under a new focus, looking beyond who can deliver a surplus, Jobs and Growth, 100 Positive Policies and other rhetoric. Fair Agenda – a self-described ‘a community of 35,000 Australians campaigning for a fair and equal future for women’ – canvassed the both persuasions of the Coalition, as well as Labor, the Greens, the Sex Party, Nick Xenophon Team, the Glenn Lazarus Team, Jacqui Lambie Network, and the Christian Democratic Party to determine how they would govern or what they would advocate for in their duties.

Instead of allowing themselves to analyse policy (or lack thereof) delving into family violence services, family law safety improvements, paid parental leave, economic equality, and reproductive rights, Fair Agenda has turned to the people who will have to deal with the immediate impacts of any given legislation and funding commitments on the ground. In their own words, they ‘worked with Domestic Violence NSW, Domestic Violence Victoria, Women’s Legal Services Australia, Family Violence Prevention Legal Services, National Association of Community Legal Centres, No To Violence/Men’s Referral Service, Reproductive Choice Australia and the National Foundation of Australian Women to score their stance on key policies’.

Making it a simple case of colour-coding, Fair Agenda notes green signifies these services have given policies a score of 80-100%. Yellow is a bit meh at 50-79%. While anything under is red, connoting DANGER DANGER DANGER – just as mother nature might give hint of poisonous critters. Grey is also on the spectrum to indicate the parties have no direction on the issue in question.

To discover the parties’ true colours, you can find the graph and more analytical tools here.

One thought on “in brief: vote 1 for women”