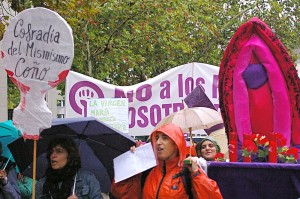 The last two rural abortion providers in Texas have closed, following the state’s passing of an anti-choice law last summer, known as HB2.

This law requires abortion doctors to obtain admitting privileges at a local hospital. The two clinics, both outposts of a network of abortion providers called Whole Women’s Health, stayed open with drastically reduced staff, whilst their owner, Amy Hagstrom Miller, admitted that they were hanging on by their fingernails.

Between July, when the HB2 law passed, and November, when the admitting privileges requirement went into effect, nearly half of the state’s 44 abortion clinics were forced to close, unable to comply with the new rules. One of the health centres in McAllen stopped providing abortions, instead providing ultrasounds and counselling to women who continued to walk in the clinic’s doors, and helped them co-ordinate travel to the nearest clinic, two hours north in Corpus Christi. Another clinic in Beaumont initially survived because one of its physicians had admitting privileges, however, he was in his seventies and wanted to retire. None of his colleagues could get the privileges in his stead.

‘I had to come to terms with the fact that these clinics had no future,’ Hagstrom Miller stated.

A much bigger threat was facing down these clinics, with the rest of the HB2 law set to be implemented in September. This will require all abortion providers to conform to the same standards as ambulatory surgical centres, outpatient care units that offer more complicated procedures, usually involving high levels of anaesthesia. Updating clinics to comply with these new rules could cost an estimated $6 million.

For many women, a long drive, an overnight stay and a few days off work to get to the nearest abortion clinic is a substantial burden, though not impossible. For many others, these new hurdles could make abortion as difficult to access as if it were illegal; with McAllen being one of the poorest cities in the United States. For many women in the Rio Grande Valley, there are many barriers preventing them from accessing basic healthcare; and many of whom also cannot drive.

Rather than attempting to save the money required for the procedure and the trip – which can be several thousand dollars – many women are taking matters into their own hands. The Rio Grande Valley already has the highest rate of self-induced abortion in America. A 2012 survey found that 12 per cent of women in clinics near the Mexico border said they had attempted to end their pregnancy on their own before seeking professional help. All of the methods attempted have potentially fatal consequences.

The consequences of the implementation of this law are long wait times for appointments becoming the norm. Estimates project that six clinics in major urban centres could be responsible for more than 70,000 abortions per year. Another consequence is, for many women, is a trip to Mexico to purchase illegal drugs.