the link between binge drinking and sexual assault 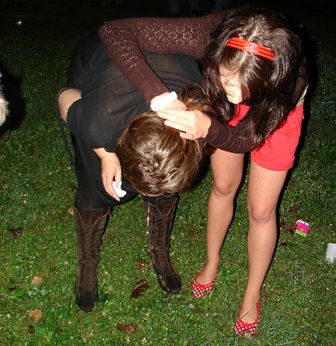 Should we tell women to stop binge drinking in order to protect them from being sexually assaulted?

Emily Yoffe, who writes the Dear Prudence column at Slate thinks so, and has attracted the ire of the Internet since having her piece published. Yoffe makes the case that binge drinking is closely related to sexual assault and yet, as she puts it, ‘we’re reluctant to tell women to stop doing it.’

Yoffe refers to a 2009 study of campus sexual assault in the United States that found that almost 20 percent of senior college women are victims of sexual assault predominately at the hands of a fellow classmate. This same study apparently states that more than 80 percent of these campus sexual assaults involve alcohol. Yoffe therefore makes her case that alcohol in this context creates situations where ‘sometimes the woman is the only one drunk and runs into a particular type of shrewd – and sober – sexual predator who lurks where women drink like a lion at a watering hole. For these kinds of men, the rise of female binge drinking has made campuses a prey-rich environment.’

Mia Freedman has since come to the writer’s defence. She said, ‘But teaching girls how to reduce their risk of sexual assault is not the same thing as victim blaming. It’s not. And we must stop confusing the two.’ Freedman also drew the wrath of the internet.

On the whole the comments and opinions seem mixed, but what do you think? Is asking women to stop binge drinking lest they find themselves assaulted the same as victim blaming? Or is it, as one commenter said, ‘just common sense’?

Jezebel has countered with a step by step called “How to Write About Rape Without Sounding Like an Asshole.” The article is set out in do’s and don’ts. For example, ‘DO encourage people of both genders to pay attention to their personal safety,’ and ‘DON’T write a piece admonishing women for not doing enough to stop their own rapes.’

Yoffe’s entire article is about rape prevention but it fails to mention anything to do with “rapist prevention.” If alcohol is a defining factor which, when taken out of the equation could prevent rape, what about the rapist’s consumption of alcohol?

Worse, Yoffe brings in an imaginary son who she says she would tell ‘that it’s in his self-interest not to be the drunken frat boy who finds himself accused of raping a drunken classmate.’ There is something terribly wrong with the sentence that Yoffe has constructed. She may as well have said, ‘Don’t get caught.’ What is not discussed in Yoffe’s article is the concept of consent, which should be central to the whole discussion.

Binge drinking is one thing. Alcohol is a substance that is used and abused in many social situations. But another common thread is consent and whether it has been given or not.

4 thoughts on “the link between binge drinking and sexual assault”