thousands turn out to protest against the federal budget Thousands of people turned out in major cities across Australia on Sunday in protest against the Liberal Party’s budget.
(Click below to hear audio report.)

They protested in response to what has been criticised as an attack on low income earners, among other things. Proposals in the budget included the introduction of a $7 ‘co-payment’ for visits to the GP, the deregulation of university fees, introduction of a fuel levy, changes to welfare and other controversial measures.

In Sydney, crowds were estimated at around 10,000 people in a largely peaceful demonstration.

The march follows ‘March in March’ protests held earlier in the year, which had little media attention and resulted in criticism by groups that attended.

Media coverage of the March in May protests garnered significantly more attention, but not without controversy, notably The Daily Telegraph’s provocative headline ‘The Ferals are Revolting’. 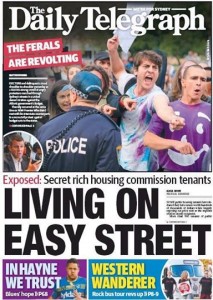 The protests come amongst recent criticisms by both Liberal and Labor parties about protests on Q&A and against Julie Bishop.

View photos from the march here.

How does the proposed Federal Budget affect you? Have your say below.