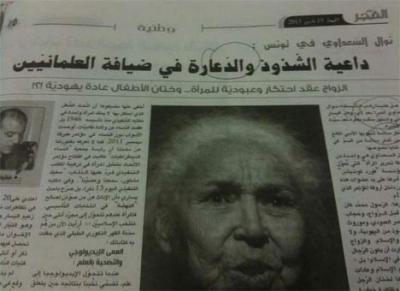 Days after visiting Tunisia and praising the Islamist government’s efforts towards gender equality, feminist author and activist Nawal El Saadawi has been condemned in an article published by the State’s newspaper.

Al-Fajr, the African nation’s ruling party’s paper, labelled the activist a ‘promoter of prostitution and homosexuality’. She had been in Tunisia to meet with President Moncef Marzouki on International Women’s Day.

Tunisia is a small country in the north of Africa. Saadawi formally met with various ministers during her stay, including minister for Women’s Affairs Sihem Badi. In an article published online, Saadawi claimed that Tunisia had succeeded over the years in acquiring rights for women. She also highlighted the fact that 60 out of the 217 members of the parliament are women.

Saadawi is a renowned Egyptian feminist who has been awarded the North-South Prize of the Council of Europe. The 82 year old was an inspirational voice in the Egyptian protests, even taking part in the Tahrir Square protests.

She is an outspoken critic of the practice of female genital mutilation, and has written many books on the topic of the treatment of women in Islam. She describes herself as an atheist. She is also a physician, and has held many high-profile positions during her lifetime. The article seeks to ridicule the activist in the staunchly Muslim society.

That the smear campaign was launched by the official State newspaper came as little surprise to commentators. Senior government figure Habib Ellouz recently referred to female mutilation as a plastic “surgery procedure”. While this was dismissed as an individual’s opinion, the attack on Saadawi came through official channels, and cannot be as easily denied.

Fadi, the editor of GayDayMag, Tunisia’s online LGBT magazine, told Gay Star News that the denigrating article was another example of the hypocrisy of the Ennahda party.

‘On the one hand they fill our ears with all the nice words they know we want to hear about the democratic transition and the other hand here comes their official paper to reveal again their sick ideology.’