woman arrested in Saudi Arabia for driving father to hospital 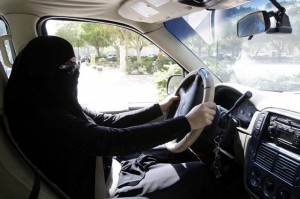 A Kuwaiti woman was arrested in Saudi Arabia earlier this week for driving her diabetic father to a hospital. The latest incident comes just days after more than 60 women filmed themselves driving and posted the videos online in protest against the country’s ban against women driving without being accompanied by a male companion.

Although no official law against female drivers exists in Saudi Arabia, women are regularly denied licenses and can face arrest for getting behind the wheel. The tradition of banning women from driving extends from the country’s hardline interpretation of Islam, with critics arguing that women driving could unravel the very fabric of Saudi society. Also, it’s apparently bad for your ovaries. Bummer. Instead it is expected that women will rely on their husbands or male relatives.

In this case the Kuwaiti woman in question was detained and is now being held in police custody pending an investigation, despite not being from Saudi Arabia.

It is not uncommon for Kuwaitis and Saudi nationals to regularly cross the border between both countries. But whereas Saudi Arabia is ultraconservative, with women requiring a male relative’s permission to work and open a bank account, women in Kuwait can drive, vote and run for political office.

It’s strange that passing a few kilometres can strip the rights of one gender.

According to the Kuwait Times, the woman was driving a Chevrolet Epica with her father riding in the passenger seat when she was stopped by local police on Sitteen Road, an area located near the Kuwait border. The media report did not mention whether her diabetic father had made it to a hospital to receive treatment.

The incidents flies in the face of widespread protests throughout Saudi Arabia where, of the 60 women protesting against their country’s prohibition of female drivers, 16 were stopped and fined 300 riyals (AUS$84) and along with their male companions, were made to pledge their obedience to the kingdom’s laws.

For those of us living in an era of Kony 2012 and the Occupy Movement, these numbers aren’t exactly staggering but they still mark the largest protest against the prohibition of female drivers that Saudi Arabia has ever experienced.

It’s made international headlines, created a myriad of Twitter hashtags and even spurred the country’s own Interior Ministry into action as it moved to clamp down on the campaign. Authorities have also approached some men who played a key part in helping their wives, sisters and friends get behind the wheel, one of whom was detained by the Saudi Interior Ministry.

Members of the kingdom’s royal family have already spoken up against the unofficial law, arguing the practicalities of the rule turn daily life into a major hassle. In a 2010 interview with FRANCE 24, Princess Loulwa al-Faisal, daughter of former King Faisal bin Abdul Aziz, said ‘there are more and more women in the workforce in Saudi Arabia and there are many families living on the pay that these women bring in.’

She noted that a Saudi woman would have to spend ‘quite a percentage of her salary to hire either a driver or a limousine service…or the husbands or the fathers or the brothers lose a lot of man-hours just to transport their female relatives.’

So much hassle, and for what? An outdated rule without its own law that not even members of the royal family agree with.