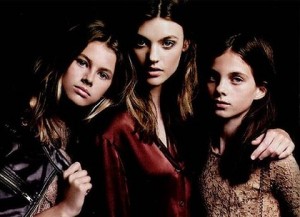 As many of you know by now, I am extremely opinionated. To the point of being completely unreasonable sometimes. After reading Emma Rush’s piece, I was understandably on edge and ready to rip Witchery to shreds. After seeing pictures of the girls I was even more horrified; they look their age. Yes I have been shocked at the age of some models in popular magazines who look like they are eighteen but are really twelve, especially when said girls are posing in a way to incite lascivious looks and raunchy comments from men two or three times their age. But those same men, at least in the articles I have read about this issue, are horrified when they find out the actual age of the girl. They are attracted to the image because they believe that they are lusting after an adult, not a child. The girls are dressed up to look a lot older than they are (and a lot more legal) because that is what sells. But the idea of men lusting after girls that actually look prepubescent made me sick to my stomach.

But then I saw the campaign, and now I don’t know what to think. I think the campaign is quite weird. They seem stunted and lack the childlike enthusiasm that one would hope to see. But I don’t think that they have been sexualised at all. I don’t think that they are ‘pouting’ or ‘leering’ at the camera – to me they just look uncomfortable, much like you would expect a kid to look in front of a camera while wearing what seems to be their mother’s clothes.

Mothers are up in arms about the campaign – saying that the girls have been ‘sexed up’ and are much too skinny. And I agree with them about the weight issue. Young girls should not be exposed to the modelling industry and its ridiculous standards, and I really do feel for the girls in the campaign. But that is a completely different issue, as I don’t think ANYONE should ever be exposed to the modelling industry and the ridiculous standards it sets. But sexed up? I really don’t think they were.

Another issue that has been brought up is that it is encouraging girls to want to grow up faster than they should. Which the campaign definitely is trying to promote, with their ‘little sisters and big sister idea’ (the concept being that the young girls want to copy their older sister). But I, like everyone else, went through the exact same thing well before Witchery got hold of the idea. I’d imagine that most of you did too. At twelve I started wearing makeup, dyed my hair, and bought mini-skirts like they were going out of style – mostly to follow my icons, who were Britney Spears, Christina Aguilera and basically anyone else who featured in Dolly magazine (don’t get me started). The style icons for tweens now aren’t any better.

Girls at that age, while they should be running around, laughing and not giving two hoots about what they look like, aren’t. They are trying to grow up too quickly, and are worried about weight because of what they see in magazines, on television and on billboards every day. I don’t think a label advertising corporate adult wear for tweens is going to make much difference at all- in fact, I think the clothes, the attitudes, and the campaign in general is a lot more empowering than advertisements such as those for Calvin Klein underwear, which are well-known for using under-age models in provocative positions, or Miley Cirus gyrating on stage (people can argue that this is empowering, but please).

Obviously it’s not great to see an advertising campaign featuring two young girls who are very thin (whether naturally or unnaturally) trying to grow up too fast but it’s no worse than everything else out there, a lot of it featuring girls who are even younger. I think that Witchery was an oddly chosen scapegoat and that Emma Rush, by only focusing on a campaign that wasn’t overtly sexual, made light of an issue (though that certainly wasn’t her intention) that permeates all of modern media.

What do you think about the campaign? Am I missing something? Or do you think that Emma Rush could have chosen a better example?

3 thoughts on “8fourteen – corporate paedophilia or a harmless fashion campaign?”