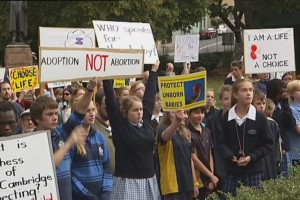 Like countless other young women, the “war on women” during the 2012 American presidential election campaign was a shock to my system. It can seem so easy to take our rights for granted in a time and culture where post-feminist discourses tell us that we can “have it all”; where Beyonce’s power-femininity dominates the all-American-male past time of the super bowl; when here in Australia we have women in some of the highest echelons of political power. As Gen Y’s we have grown up amidst a sense of girl-power, freedom and mobility as women. But moral and political debates on abortion rights bring me back to earth with the stark realisation that in some areas of privileged, democratic and “egalitarian” Western societies, women still do not have full reproductive rights, and the road ahead is a steep and rough climb.

Access to safe and legal abortions has been a long-standing goal of feminist movements internationally since the early days of Women’s Lib. The issue is fraught with political, moral and religious discourse, producing highly emotional responses. The termination of pregnancy symbolises death, the opposite of life in a Christian-influenced culture where birth and motherhood have been consecrated and valorised as ideal functions of femininity. Although pregnancy is an internal state within an individual woman’s body, it becomes a social and political issue when a pregnancy is unwanted and zygotes are personified as human. Individuals who have never had to face the reality of an unwanted pregnancy, the hollow feeling of having something inside your own body that could threaten your social, economic, physical and mental wellbeing, are quick to label the choice to terminate pregnancy as “selfish” or “cruel.” Such sentiments arise in a culture that values feminine self-sacrifice over individual women’s subjectivities and what they can contribute to the world in and of themselves.

I have always associated heated and concerning debates on women’s reproductive rights with American republican politics. I have felt secure in thinking that misogynous religious fervour is something that happens in the Deep South, but not here, not in Australia. Recent events in my home state of Tasmania have caused me to rethink my naivety.

The Tasmanian minister for health, Michelle O’Byrne, has proposed changes to abortion law in order to make abortions legal and supported under the public health system. In Tasmania, abortions are the only medical procedures that remain under the criminal act, making access difficult and stigmatising for many women. The public response against the proposed Reproductive Health (access to terminations) Bill has been alarming. Full-page anti-abortion advertisements funded by conservative church groups have been rife in local newspapers, many of them shaming women who choose abortions. A (predominantly male) group of church leaders have banded together to oppose the apparent “Culture of Death” new abortion laws, along with proposed euthanasia, same-sex marriage and same-sex adoptive parenting rights reforms would bring to Tasmania.

This is nothing new or very shocking, and these groups have the right to protest their views as much as pro-choice groups do. But there has been public uproar over an anti-abortion protest staged last week by primary school children from religious schools, supported by school officials and affiliated religious groups. Amidst this silent protest were girls as young as nine holding placards with slogans such as ‘Abortion Is Murder’ and ‘Protect Unborn Children.’

This shocking display of religious indoctrination particularly upset me in that these girls will grow up to be young women who may one day be faced with an unexpected pregnancy. As is the case with purity balls, abstinence and the general glorification of virginity, a young woman faced with an unexpected pregnancy who is situated within such an ideology would experience intense stigma and shame that is unhealthy and cruel and may result in self harm or the seeking of a back yard abortion which could severely threaten her health and even her life. This would perpetuate more of a “culture of death” than allowing women equal, legitimate access to safe and legal abortions under the public health system in Tasmania.