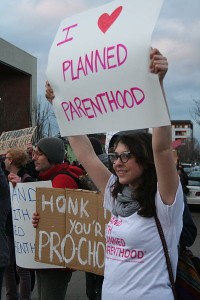 Another day, another pro-life, male, politician who probably wouldn’t know a vagina from a tree hollow, let alone what actually goes on inside the walls of an abortion clinic. Bernie Finn’s comments regarding abortion as unacceptable under any circumstance and rape related abortions being akin to being raped for a ‘second time’ were neither new nor educated. To be frank, this was just another case of a male MP slopping his two cents of politicised semen against the face of women’s rights. In light of Mr Finn’s comments I sat down with two people to talk about their experience with abortion.

Meeting Annie*, a university student and mother in her apartment felt strange. Almost like I was going on a first date. I wasn’t, of course, I was drinking coffee and talking about abortion, but you can get why I was nervous. Annie welcomed telling me the stories of her two abortions, one as a teenager and the other as an adult. She seemed relaxed and eager to share. I began by asking her about the babies conceived. ‘Lets not call them babies,’ she says. I suggest ‘things’. ‘Ah, how about foetuses?’ We both laugh, introducing a note of levity to the interview. ‘Well, I didn’t want my first abortion. My dad said that if I didn’t have it I would have no father. I look back at it now and think, “I’m so glad that I did that”. But it took me about three years to feel that way. After the abortion I had a lot of nightmares and I went into depression. I tried, [to get pregnant again] but I never did.’ This affected her arduous relationship with her partner. ‘We broke up two weeks after the abortion. He said that I was crazy because I just cried all day. He didn’t understand.’ These remarks hit me hard highlighting just how much of a women’s only plight this issue is.

Annie tells me that her first abortion was a lonely experience. ‘I sat in the waiting room for hours and all this time I was praying that the abortion machines would break. I was trying not to cry in the waiting room. The other girls weren’t crying so I was thinking “I can’t cry if no one else is crying”. This whole time I was just saying to my stomach “I’m so sorry, I am so, so sorry.” They gave me two pills to soften my cervix and swallowing those pills was incredibly hard because I knew that that was the first step, and I knew that if I swallowed those pills even if I backed out there was no going back. The abortion was really just finishing what those pills were going to start…they didn’t put me to sleep so I remember the whole thing. And although they numb you you still feel everything, and I felt the scraping inside my cervix. It felt like a big spoon in there.’

Unlike her first abortion, Annie considers her second abortion to be quite peaceful. She tells me that the other girls with the same fate were the most comfortable people to be around. ‘It was like we were just talking at a coffee shop. We were just talking about everything and I don’t actually remember whether we discussed the pregnancies.’

Later that day I sat down with Jerome* who shared with me how he felt as a man in the setting of something seemingly outside of his own gender. Jerome and his partner decided on an abortion together, however he does admit, ‘I always had a conservative streak through me; A pro-life kind of streak. But then after having it happen to me first hand my views now are definitely pro-choice.’

‘I didn’t stay for the procedure itself. I wasn’t allowed to. I felt bad having to leave her there. But I found a park and just sat back getting a grasp of what was happening, not feeling bad or regretful but just realising that this is a big point in both of our lives. It was a strong kind of moment. One thing I remember really well was getting the phone call from the nurse to say that she was done. The nervousness was gone when I heard the nurse’s voice, the calmness in her voice. Just hearing the nurse in that tone I knew everything was okay.’

Jerome and Annie tell me they have no regrets even now about their choices. Jerome nods when I ask him if it has shaped him into the person he is today. ‘It was in some ways such a catastrophic event, that we were able to leave with our relationship still in tact. It only made us stronger.’ Even though Annie has had a troubled time coming to grips with her first abortion, she still holds the view that all women have the right to access these procedures. ‘Any woman that decides not to continue with a pregnancy is just as brave as someone continuing with a pregnancy. It’s not an easy decision at all, but they know themselves best. I don’t think there is one situation in the whole world where abortion shouldn’t be an option.’
*All names have been changed by request of the interviewees