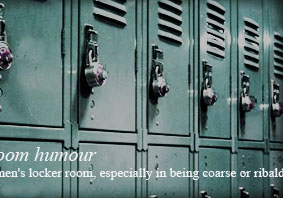 When the noted Australian female sports journalist Rebecca Wilson died earlier this month, public outpourings of condolence were swiftly forthcoming. Recognising Wilson’s groundbreaking work during her career of more than 35 years and paving the way for other female journalists in what remains traditionally a man’s domain, The Australian newspaper credited Wilson with ‘smashing down the locker room door in a bygone era of bawdy banter and sexist behaviour.’

While Wilson’s significant achievements are undeniable, the question remains: just how much sexist behaviour continues unabated behind the sanctity of the locker room door? And should we be worried about the role this ‘in private’ behaviour is playing in the maintenance of an ever present undercurrent of misogyny?

Donald Trump recently dismissed his 2005 boasts about sexually assaulting women as ‘locker room banter,’ seeking to depict his remarks as harmless and a distraction from his presidential campaign. Although Trump had a few stalwart defenders, social and offline media immediately lit up with overwhelming condemnation of his behaviour.

Meanwhile a secondary commentary stream – that of locker room demystification – also gained momentum. Professional athletes from a variety of sports codes were quick to come to the defence of the locker room, tweeting loudly and insistently: non-consensual sex is not locker room talk. Are they to be believed?

The Oxford English Dictionary defines locker room humour as: Regarded as characteristic of or suited to a men’s locker room, especially as being coarse or ribald. It goes on to list numerous synonyms which include: obscene, lewd, sordid, vile and depraved.

Senator Pauline Hanson, arguing with Senator Derryn Hinch over the issue, sought to downplay Trump’s words, describing them as ‘private.’ In playing his locker room card, Trump also emphasised the private nature of his conversation, implying the same ‘boys will be boys’ attitude that attempts to trivialise offence at men’s behaviour and in turn leads to the culture of victim-blaming. By using the excuse that behind the closed door of the locker room is a sacred place, are we inadvertently accepting broader implications of how we view what happens in public versus what happens in private?

In March this year, former American footballer James Cannida blogged about an incident that occurred in the Los Angeles Lakers locker room. Rookie player D’Angelo Russell recorded, and then shared, his teammate Nick Young talking about cheating on his fiancé, the Australian-born rapper Iggy Azalea. Later Russell acknowledged that his friendship with Young was now in jeopardy, saying, ‘I feel as sick as possible. I wish I could make things better…’

Apparently Russell’s release of the footage constituted a major breach of trust because he broke the sacred code: what is said in the locker room stays in the locker room. Interestingly there’s no mention in Cannida’s blog of Iggy Azalea and how she felt about her fiancé cheating on her.

Okay, so maybe my idealism is premature. Nevertheless, if recent events have shown me anything, it is this: when men are caught out behaving inappropriately towards women, the pushback is hard and fast.

Senate Majority Leader Mitch McConnell said: ‘As the father of three daughters, I strongly believe that Trump needs to apologise directly to women and girls everywhere.’

But while I applaud Romney and McConnell for their responses, they have still not stepped away from their inherently male privilege. Still they define women as wives and daughters; that is, they define women only in relation to themselves as men.

So let’s applaud President Barack Obama, who moved the journey towards gender equality one significant step further when he said, ‘You don’t have to be a husband or a father to hear what we heard just a few days ago and say that’s not right … You just have to be a decent human being…’

One of the best things about the outing of Trump’s 2005 comments is that the conversation we traditionally avoid, is now being had.

6 thoughts on “behind the locker room door: secret sexism”