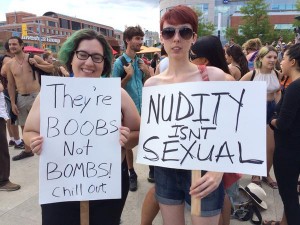 Remember the feeling of the sun on your back, the wind blowing through your hair, the sense of freedom as you journey through life bare-chested and liberated? Free from the constraints of the demon bra cage? No?

With the rise of a highly critical and socially progressive young generation, the conventions of Western society are constantly being questioned. In light of the recent rally held in Canada, catalysed by the incident of three sisters being stopped for bicycling semi-nude, the issue of women’s rights to go bare-chested has gained prominence.

It is accepted that men walk around shirtless to cool off in the sweltering summer heat. But on the other hand, women are made to feel as if they are under an implicit rule that they cannot enjoy similar salvation because it is simply unladylike to bare all.

Martin Luther King’s ‘summer of discontent’, and the sweltering ‘heat of injustice… heat of oppression’ that he railed against arguably takes on a whole new meaning: one related to the rights of women to enjoy the same comforts and liberties as their male counterparts, and not be subject to double standards. We see that this is an equality debate worth contesting once again: the gendered conventions through which women are disadvantaged.

The desexualisation of women’s breasts is an important factor should we wish to remove the social stigma associated with topless women. Firstly, it should be reiterated that women’s breasts are just another body part. Yes, there is an obvious element of sexuality to it in that they are the stuff of many sexual fantasies, I’m sure. However, the sexual connotation seemingly inherent in women’s breasts is merely a product of objectification.

Breasts are no longer seen and accepted as simply a natural part of our body used for the primary purpose of breastfeeding anymore. Rather, they are now inextricably linked with sexual promiscuity. Since childhood, we have been indoctrinated into believing this concept of breasts being inherently sexual. We have grown up hastily turning our blushing faces away when we are faced with an image of a naked person or, for some of us, staring open-mouthed and transfixed. Either way, there is clearly some sort of greater and unwarranted significance being placed on women’s milk-makers. There is a great video by feminist and sexual activist Laci Green on Youtube whereby she wittily covers common themes of sexualisation in regards to her own personal experience.

Yet we should also remain cognisant that there is a fine line between topless rights and indecent exposure. There are definitely certain intimate parts of a person that should remain private, hence the term ‘private parts’. Whilst there are many enthusiasts who are all for freeing the nipple and total liberation, there are also the conservatives who remain wary of transgressing the limits of civility and stepping into a land of wild freedom. Of course, the idea of liberty with limits is clearly paradoxical, and for that reason, it is hard to determine at what point exactly a limit should be imposed.

The concern over whether we are taking this point too far is one that I can sympathise with. Although there is the clear and unjust sexual objectification of our breasts, I believe there is also the need for modesty. A balanced solution is required for those who feel strongly about having topless rights recognised.

Simply respecting the rights and opinions of those who do actually feel that way is an admirable first step. Given Australia’s system of liberal democracy especially, as we prize individual freedom, the voices of these women regarding their bodily autonomy should be heard. Whilst this issue may not be one of the most significant in the larger scheme of things, it still plays its role in promoting gender equality.

One thought on “boobs aren’t bombs: fighting for topless rights”