born to die: lana del rey and the romanticisation of dying young in celebrity culture 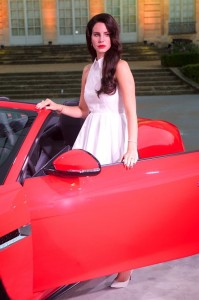 Lana Del Rey is turning into one of the world’s biggest superstars with each passing day. Her music has been increasingly popular over the last few years, with the release of popular hit tracks including ‘Summertime Sadness’ and ‘Young and Beautiful’, the latter given even more of a boost of popularity given its eminence in the Baz Luhrmann film adaptation of The Great Gatsby, the film at the centre of seemingly everybody’s radar when it was released late last year.

With the release of Del Rey’s third and latest album Ultraviolence earlier this month, her stardom has exploded into new realms. Seemingly every music journalist and publication has grappled for interviews with her, the album has so far received positive reviews, and is currently sitting at number six on the iTunes album chart. Her music is undoubtedly the work of a very talented woman, but it is also her stylised image in addition to her music that is drawing Del Rey publicity and fascination from the general public and the music world.

In the last month, Lana Del Rey has been quoted as saying that she is ‘bored’ by the concept of feminism, saying that she is much more interested in ‘you know, SpaceX and Tesla, what’s going to happen with our intergalactic possibilities.’

This (rightly, in my opinion) drew Del Rey a lot of criticism from all angles, especially when considering that her album Ultraviolence undoubtedly deals with many issues of gender, with some critics even considering the whole album to be an ‘ode to domestic violence against women’, and includes such track titles as ‘Sad Girl’, ‘Pretty When You Cry’ and ‘Fucked My Way Up To The Top.’

In a recent interview with the Guardian music critic Tim Jonze, she cited two of her heroes and musical influences are Kurt Cobain and Amy Winehouse. When asked about the link between these two musicians (their premature deaths at the age of twenty-seven), she was asked if she sees early death as glamorous. ‘I don’t know. Umm, yeah,’ came Del Rey’s response, followed by ‘I was I was dead already…I do! I don’t want to have to keep doing this. But I am…That’s just how I feel. If it wasn’t that way, then I wouldn’t say it.’

With this unethical response to the ways in which early death is glamorised by media and musical visions of eternal youth and an inevitable musical legacy, the painful reality of these unreasonable expectations has prompted some to speak out against these comments. Daughter of the late Kurt Cobain, 21-year-old Frances Bean Cobain, immediately took to her Twitter to slam Del Rey’s comments. In a series of tweets from the usually intensely private Cobain, she delivered this to Del Rey:

‘The death of young musicians isn’t something to romanticise. I’ll never know my father [Frances was 19 months old when her father died] because he died young & it becomes a desirable feat because [people] like you think it’s “cool”. Well, it’s fucking not. Embrace life, because you only get one. The [people] you mentioned wasted that life. Don’t be one of those [people].’

Later, Cobain qualified these tweets with a disclaimer: ‘I’m not attacking anyone. I have no animosity towards Lana, I was just trying to put things in perspective from personal experience.’

There can be no doubting that, as Cobain rightly said, the death of young musicians is instantly romanticised by media and fans alike. Yet there is equally no doubt that this romanticism has harsh and enduring effects on the family, friends and even fans of these young musicians. In a way, Del Rey can hardly be blamed for merely trying to cash in on the way in which young death has been historically glamorised in Western celebrity culture. She did respond to Cobain’s tweets, however, with ‘it’s all good. He was asking me a lot [about] your dad I said I liked him because he was talented not because he died young. The other half of what I said wasn’t really related to the people he mentioned. I don’t find that part of music glam either.’

Interestingly, in 2008, Cobain’s Sweet 16 party was ‘suicide’ themed, which drew her an equal amount of scrutiny and criticism for her arguably poor taste, in light of her family’s history. When taking into account her recent criticism towards Del Rey, we can only assume that she has matured significantly over her years to acknowledge the true harm and pain that suicide and premature death causes not only her family, but countless other families alike.

No matter whose side of this argument we choose to take, it is almost certain that these such comments will do no damage to Del Rey’s album sales or quirky public image. And by granting publicity to the issue of premature death, we can at least acknowledge that, although it may be romanticised, it is the harsh reality that should be given the publicity.

One thought on “born to die: lana del rey and the romanticisation of dying young in celebrity culture”