breastfeeding and the myth of choice 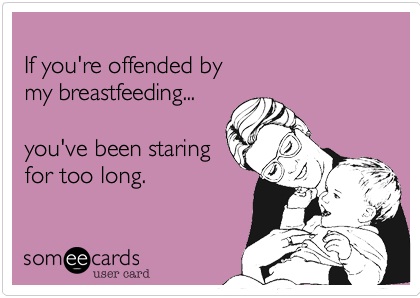 And choice has very little to do with any of it.

You see, every couple of months, another woman in Australia is shamed as she breastfeeds her baby. She’s shamed for doing it wrong — in the wrong place, at the wrong time, in the wrong way. This week, a Melbourne woman spoke to the media about her experiences of discrimination at her local hairdressers after she started breastfeeding her five month old daughter beneath the hairdressing smock. According to Cassie Hanlin, she was made to feel ‘embarrassed and humiliated’ about breastfeeding — her hairdresser stopped cutting her hair and did not return to complete the cut, instead making Cassie wait for close to half an hour without service until eventually being told that a junior hairdresser would take over. According to Cassie, the original hairdresser explained that she couldn’t cut her hair ‘while she was breastfeeding’.

The breastfeeding in public debate further implies (by the notion that it is, in fact, a “debate” and therefore logically has an argument for and against) that women have a choice — a choice to decide whether their breastfeeding is a private or public matter. But if you are a woman who breastfeeds, there is little choice regarding when this breastfeeding occurs. Which generally means where you breastfeed is not a choice. It has to be wherever you are, while you do whatever you’re doing (unless of course we’re all conveniently confined within the safe walls of our house).

And this notion of choice seems to be conveniently appropriated by those who discriminate despite the fact that choice has very little to do with anything. The owner of the hairdressing salon at the centre of this case of discrimination said of his staff member:  ‘She didn’t want to cut her hair while she was breastfeeding, which she is entitled to do’. The thing is, she’s not entitled to do so. Implying that his employee has a choice about whether to provide a service to a woman breastfeeding blatantly disregards the law. In fact, there is both federal and state law protecting a woman’s right to breastfeed. Anywhere. And protecting a woman’s right to receive a service while doing so. And just like every other law in our country, you don’t have choice about adhering to it (unless of course you wish to be prosecuted for it). In Victoria, breastfeeding is a protected attribute under the Equal Opportunity Act. This means that the law protects individuals from discrimination on the basis of a range of protected attributes — age, breastfeeding, gender, disability, marital status, pregnancy, race, religion. In other words, as someone delivering a service, it is never your choice to determine whether you do or don’t deliver a service to people based on these attributes. The owner of the hairdressing salon would be wise to spend his time educating his staff about the law and his obligations as a service provider rather than defending his employee’s non-existent choice.

It’s time to dispel the myth of choice surrounding breastfeeding. Breastfeeding in public is not a choice in the same way that delivering a service to a woman breastfeeding is never a choice. So stop pretending it is.

4 thoughts on “breastfeeding and the myth of choice”