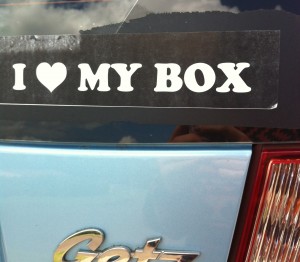 On the rear of my car, there is a sticker declaring how much I love my box. I’m not just talking about the hatchback or the boxes of wine it is meant to denote (cheers, university Goonion.) This sticker also connotes the admiration I have for my vagina, my vulva and all the other intricate parts that come together as a glorious system of pleasure and, for some, reproduction. So when I received an email alerting me to a prank site that ships cardboard boxes to women containing nasty things to shame them for their boxes, I was revolted.

For just US$14.99, Wash Your Box will send someone you want to body shame a loofa, some cleanser and some nasty notes to scream: ‘you smell bad and you should feel bad’. ‘She’ll end up using a product called “Moist” sent by some asshole because the fear of having a vag [sic] that smells like a dead bear covered in mayonnaise is too much,’ the website says. Apparently it’s even more offensive because women supposedly have an aversion to the word “moist”. (Sorry, based on their logic, I probably should have put a trigger warning at the beginning of the article, in case you dislike “moist”. Doubly sorry if you’re eating cake.) You can send your own personalised note of abuse along with it, again, supposedly for comedic effect. ‘Then sit back knowing you’ve crushed a soul,’ the website says. ‘Tenting your fingers Mr Burns style is optional but recommended.’

The website’s creator, Eva Stara, made the site with the intent of the packages being humorous gifts between friends. She says it didn’t mean to have misogynistic undertones, just to rip on some stinky sisters in her yoga class who reminded her olfactory sense of ‘the underside of a raccoon’, MTV News reports. ‘I’ve tried to avoid the issues [of misogyny] by keeping the copy rather light,’ Stara told the youth media network. ‘I think it [could] use a few more changes to soften up the message a bit. I certainly wouldn’t want this to be something for [misogynists] to attach to.’

But misogyny is embedded deep within the message, even if Stara has not caught wind of it. The website even embeds a video of a scene from the film Bad Santa, in which the titular character asserts he’s sick because he ‘loved an unclean woman’. This overtly alludes to discourse on vaginas as dirty and archaic conceptions of sexually transmitted infections as “venereal diseases”, where women were seen as vectors of illness.

Intent aside, Wash Your Box is just one symptom of women internalising cunt hatred imposed on them by men and patriarchal institutions over millennia. Such hatred sees even people with a vagina view women’s genitals as unsightly, unsanitary or generally unsavoury… so much so that some women have never viewed their own. Women undergo cosmetic procedures to change the appearance of their genitals, they buy products to artificially scent or cleanse them, they do many things which disrupt and arguably disfigure their genitals for a cultural standard they do not analyse. Most people are so perplexed by vaginas that they do not engage with the idea of them being as varied in appearance as human faces: they all have the same common elements but these are spaced or sized with dazzling variability. We are told they must not be smelly, sweaty, asymmetrical, flappy, too floppy or – as Western societies seem obsessed with – too hairy. The idea of them being so very natural becomes repugnant because ideal femininities are contrived.

This may conflict a lot of people, but we are in fact animals and we have likely stunk since the sun heated up the primordial ooze we crawled out of. We have sweat glands and our genitals get sweaty much like any other part of the human body. Scent is, regardless of its location, a natural outcome of being a human being. Stara’s joke suggests the whiff of wild American fauna is somehow less offensive than women’s vaginas. I don’t know if you have ever smelt a dead rat in an outdoor carpark in the middle of a scorching Australian summer, but based that stink I can’t imagine that even bacterial vaginosis could be more offensive than the larger creatures she refers to, which are both renowned for rummaging through rubbish bins when they find their way into human environments.

Beyond the obvious ideological issues with Wash Your Box, douching and using soap in the vagina without your doctor’s advice will upset the chemicals within, causing discomfort and perhaps even more odour. Vaginas are host to a range of bacteria, which live in their individual “ecosystem” and generally speaking, regulate themselves. Your odours – even if you do feel it smells like dead bear covered in mayonnaise – are nothing to be ashamed of. It is advisable to consult with your doctor if you are worried or notice any changes to your odour or normal discharge patterns, however. Soap up your car, not your vagina. More importantly: don’t berate your friend to wash her box; get her to love it and know what is normal for her!

One thought on “don’t wash your box, love your box”