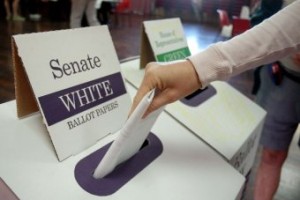 ‘I’m voting Labor this election because I believe our government needs to take big and bold but achievable action to set ourselves up for the uncertain future.

Labor has always been the party of national transformation. From worker’s rights and Indigenous reconciliation to Medicare and sweeping reforms to the economy, it’s in Labor’s blood. Supporting people with a disability, carbon pricing, a school funding model that works for all Australians and a visionary broadband plan are all evidence of this in recent times.

A lot of this is at stake at the next election. I worry about things like disability support despite assurances of bipartisanship, because I think the Coalition’s economic philosophy is to cut in tough times, rather than to grow. With the Coalition not using the tax and spending numbers they’ll have to use in government to cost their election policies), they could be creating a situation of promising big only to get out the cleaver once elected. I would rather the government support the jobs of everyday Australians and cement these big reforms as lasting institutions.

Many people I talk to feel this election is about choosing the least worse option; I can understand that sentiment. But, scratching under the policy-light surface that is the usual level of political discourse of late, there emerge serious reasons why this Government needs to be re-elected.’ – Daniel, 23

‘I think the best way to start is by explaining why I’m NOT voting for the Liberal Party. Apart from the well-known negative points of reluctance to commit to any climate change action, and their leader, Tony Abbott, being a chauvinist pig with no real solutions and just negative slogans, my biggest issues with the party as a whole are as follows:

– They have not released their counter budget three weeks before the election, with shadow treasurer Joe Hockey brandishing the opinion that the Treasury is biased and untrustworthy, and have instead been speaking of cuts without actually saying what will be cut in order to return the budget to surplus;
– Their shadow budgets in recent years have been rife with holes and uncosted policies, showing that they have not done their homework and have instead relied on the voting public to be swayed by two word slogans with no substance;
– Apart from their ‘Our Plan’ nonsense-filled booklet, the party lacks substantial goals for Australia, and instead we’re filled with dread of the unknown: will the original Howard-era Tony Abbott-designed Workchoices be back? Will the GST be expanded?; and
– The planned decrease in company tax: although this will help small businesses, ultimately this is going to assist the big companies in making more profits as well as taking $5 billion out of the budget, and eventually having to be repaid most likely by working and middle class Australians.

Labor on the other hand has a plan: climate action through an emissions trading scheme, the National Disability Insurance Scheme, Gonski School Reforms, optic fibre broadband, as well as an eloquent, respectable and intelligent leader who I would be proud to continue having as Prime Minister.’ – Marta, 24

‘I have always voted Green. I agree with their politics and while they may never hold the majority, I believe as an opposition party they are essentially the political conscience of Australia.

However, until the coup, I was going to vote Labor in the upcoming election. This was not because of any love for Gillard – though I’ll admit a respect for her reliance – rather I aimed at keeping Abbot out. Abbot is dangerous; he is among other things, a climate change denying, gay hating misogynist who would see Australia dial the decades back. Moreover he and his party are uncompromising. As a vote for Labor was a vote against Liberal I was willing to forsake my Green leanings. Labor had numerous politics I didn’t agree with – university funding, foreign aid etc – but they were politics I could swallow in the hope of post election change.

Then, after explicitly saying he wouldn’t, came Rudd.  Who – aside from the character flaws the coup showcased – has altered the Carbon Tax to near extinction and announced a hard-line refugee policy that makes me honestly ashamed to be Australian.  I now cannot in good conscious vote for either of the major political parties.

Thus perhaps the obvious move would be to vote Green as always. However, as preference voting means a vote for the Greens is essentially a vote for Labor I am seemingly with no options. I am living in a representative democracy with no one to represent me.

If things to not change in the next month I will on September 7th be voting donkey.’ – Claire, 23

‘Giraffe, camel, pony, rabbit,
I will not vote for Tony Abbott,
Smoke, steam, mountain mist,
Because he’s a misogynist.

Okay, so not Tony or Tony’s Cronies, then who? In all honesty since the demise of Julia, whose greatest appeal to me was that she was the First Woman Prime Minister. Yes, all capitals, children of the future will write it like that in school projects! Also the fact that she was a woman was never let go, not even once, from ‘Ditch the Witch’ unto ‘Big Red Box’ do we part. What were her policies? I am not entirely sure as the constant stream of vitriol and hail of Vegemite sandwiches just never stopped. How about K. Rudd, well, Rudd is a Dudd, completely Krudd, so not going there. I guess it’s Green for me, because they have some policies I can get behind. Policies that involve the simple questions like: Do you like living on the planet? Do you want a Great Barrier Reef that your grandchildren can see for themselves and not just on video? Yes. Yes, I do. Well ‘Vote Green’ because we are trying to hold it all together, not just for our own greedy ‘massive pension forever’ selves, but for all the little Nemo lovers as well.’ – Rianh, 49