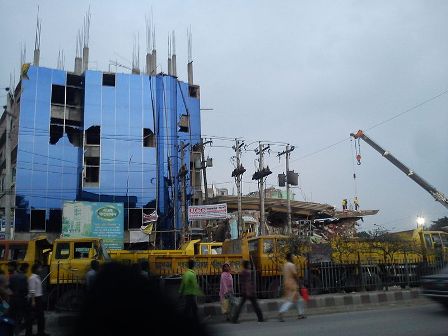 By now, you would have heard about the intense tragedy of this Bangladesh garment factory’s collapse.

Rana Plaza was an eight-storey building in Dhaka’s manufacturing zone, housing multiple factories where clothes for Western brands were manufactured. The owners and managing director of the complex allegedly ignored safety warnings and employees saw cracks in the walls the day of the collapse.

On the morning of April 24, workers were reassured of the structural integrity of the complex, but that same day debris fell from the ceilings and the building crumpled. The five factories within Rana Plaza together employ more than 3000 workers; recent reports cited the death toll at over 400 but local police warn it could rise to 1300, while nearby Enam Hospital has seen to 650 survivors. New York Times writer Jim Yardley provides a snapshot of the carnage:

‘The scope of injuries was horrifying: fractured skulls, crushed rib cages, severed livers, ruptured spleens. One survivor lost both legs. So many people suffered crushed limbs that [the] hospital sent a medical team to the wreckage to help handle on-site amputations.’

The managing director of the building, several engineers and two owners have been arrested, despite co-owner Mohammed Sahel Rana, a local politician, attempting to flee before being captured on the Indian border.

The horror seen in Dhaka is caused by an industry that desperately needs reform. 80% of Bangladesh’s exports are garments; the income generated reportedly made $US20bn last year. Factory workers are generally paid the minimum wage of $US37-40 per month, and sometimes work 12-14 hour days.  In Dhaka alone, there are over 100,000 factories with minimal regulation.

The Tazreen garment factory in the Dhaka outskirts was razed by fire at the end of 2012 – 117 people were confirmed dead, making it the deadliest fire ever in a Bangladesh factory. Police accused supervisors of padlocking doors to prevent workers from exiting. It’s painfully obvious that these sweatshops must be eradicated or heavily regulated.

The tragedies in the Bangladesh garment industry have multiple similarities to the 1911 Shirtwaist fire in the US. In ‘Raining Blood and Money’, Cassandra Atherton’s explicit imagining of the tragedy in Southerly, bodies thudded onto the New York pavement as trapped workers flung themselves from the eighth and ninth floors rather than being at the mercy of the inferno within. In 18 minutes, 146 people died.

The Shirtwaist fire had immeasurable impact on US work-safety regulation, especially for women. The catastrophe sparked a working class movement which, led by social activists, influenced the passing of legislation that made labour laws more humane.

Will the Dhaka collapse become Bangladesh’s Shirtwaist fire and incite radical change? People are taking to the streets – reportedly there were 15,000 angry people in the Ashulia industrial zone last Monday, marching to protest the deaths of workers and to call for the execution of complex owner Rana.

Retributive justice is on the Bangladeshi locals’ lips. But what does it have to do with us in Australia?

Alecia Simmonds writes at Daily Life: ‘The labels found inside the collapsed factory included Benetton, Mango, Joe Fresh, Primark and C&A. My floor was littered with dresses and tee-shirts that had been run through the sewing machines of people working in prison conditions or even possibly now dead.’

Outsourced labour is a system of inequality, exploited by big name clothing manufacturers for years. It’s inexpensive for international brands to commission cheap labour in developing countries without concerning themselves with the quality of life for the workers. While this creates millions of jobs that would otherwise not exist, the conditions are frequently not up to scratch.

Wake up! We are buying the clothes in these factories. SBS reported that ‘about half the nation’s garment factories did not meet work safety standards.’  Can you tell me who made the clothes on your back, how much were they paid, and whether they worked in humane conditions? Could (or would) the brand’s company tell you that?

If we’re honest with ourselves, we are complicit in the existence of unsafe factories. We buy cheap clothes, wilfully blind to where they come from and why they’re so cheap. We don’t care that the outsourcing of labour maintains a level of disadvantage. The low ethical standards must change, and in light of the Dhaka collapse, we have a voice.

‘If you’re purchasing the garment, have a look at the label, note that it’s made in Bangladesh or China or Vietnam and then write to the company on their public Facebook or write them a letter … companies really do care about what consumers think and so it’s important to purchase the product but also speak your mind about how you want your products to be made and under what conditions.’

It’s that easy. More drastically, you could refuse to purchase clothes made in a country known to have unfair labour practices, and instead, spend your money on ethically guaranteed labels. Companies listen when you make a statement with your dollar.

Let us not stand by until another unspeakable incident shakes us into action.  Let the collapse of Rana Plaza be a catalyst for change.

One thought on “factory collapse in bangladesh highlights unsafe conditions”