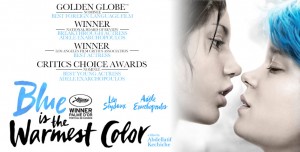 I am so conflicted about this film.

Blue is the Warmest Colour tells the coming of age story of a young woman, Adele, and how she fell for her first big love, Emma. It explores themes of love, desire, heartbreak and many other intense emotions that go along with being young and falling head over heels in a raw, un-embellished manner. The language of love and heartbreak is universal and viewers cannot help but relate to Adele as she navigates her way through this first relationship.

I’m all for a well-told love story, in fact, I’m deeply impressed when it is done well. Unfortunately this film seemed to be told from two viewpoints – one committed to story-telling in this raw manner, and the other was that of a straight man watching a sexy movie.

When I first heard about this film I immediately put my hand up to review it. It had been so long since I’d seen a decent film that centred solely on gay, specifically, lesbian characters. I was a child of the 1990s when gay cinema was brimming with classics like Go Fish, Stonewall and Get Real. I was all set to feel nostalgic and enjoy some cinema that was not stock standard in any way.

I made the classic mistake of doing a large amount of reading before seeing the film – something I’d taught myself not to do as it creates bias. Unfortunately I can’t resist a good drama and this film is steeped in it. The lead actresses (Adèle Exarchopoulos and Lea Seydoux) have done everything in their power to separate themselves from the film and have gone on record stating that the director, Abdellatif Kechiche, made them feel like prostitutes and that one of the many sex scenes took a gruelling 10 days to film. What followed was a series of furious retorts back on forth avidly observed by filmgoers from around the world. Adding yet another layer of spectacle, the film came under fire from Julie Maroh, the author of the graphic novel on which the film is based, who called the graphic sex scenes ‘ridiculous’ and asked if there were there any actual lesbians on set.

When I described the film to my fiance he rolled his eyes and said ‘I’ll bet you ten bucks we’ll walk out of this film thinking the exact same story could’ve been told about two men.’ He wasn’t privy to the scandals I’d been reading about and yet that was exactly where his logic landed; the only reason to cast to women in this role is because they are young and beautiful and straight men like watching them have sex. I thought that while that may be true, why does it matter? Just because straight men are titillated by watching lesbians have sex is not a good enough reason to marginalise lesbian love stories. Let them watch it and have whatever reaction they have. What would bother me more is if this was the only reason the film was made while claiming to be an authentic love story.

I was quietly hopeful that this was not the case and as the movie progressed bit by bit (as is the typical manner of French films compared to British and American cinema) I began to relax and enjoy it. Adele was a highly relatable, understated character – she was dissatisfied with the sex she was having with her boyfriend (not at all uncommon in teenage women) and she was itching to finish high school. Watching her sweet hopefulness grow with each encounter with Emma was heart-warming to watch – I found myself really rooting for her.

I really loved parts of this film. Moments of heartbreak were demonstrated with gushing eyeballs and snot dangling from noses because when you’re that miserable who cares what you look like? So much was captured so poignantly. Unfortunately the same cannot be said for the lovemaking.

Having said all of that, Blue is the Warmest Colour portrays the agony of first heartbreak in an uncompromising fashion. It has the two crucial elements that make a fantastic film – great acting and engaging dialogue. Definitely worth a look.

3 thoughts on “film review: blue is the warmest colour”