fur is a feminist issue 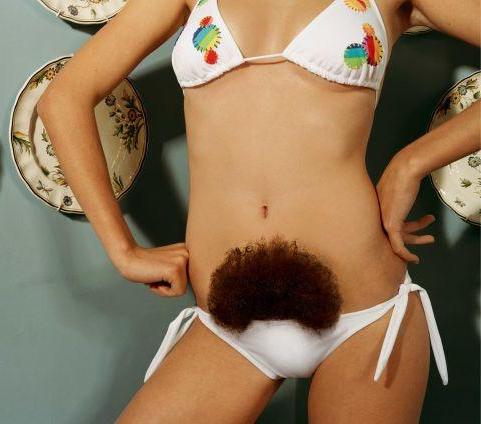 It’s summertime in Melbourne and as the city begins to resemble an oversized convection oven I, like many others, hanker for the cooling breezes and soothing water of the seaside. As one of the few places where it is acceptable to disport yourself in the nearly nude, the beach presents challenges for the feminist bather. One in particular has been on my mind, thanks to a recent conversation with a friend. I asked her to accompany me to the beach – she would be coming straight from work and I would bring her bikini – and she declined, citing not having waxed her bikini line as a reason. Thinking about it, although I know many women who choose not to shave their legs or armpits, I have never seen any of them, or indeed a stranger, flaunting a thick mass of visible pubes. As Germaine Greer points out in The Whole Woman, to do so would be to constitute a ‘walking obscenity.’ How did the stigma around female pubic hair become so strong that even the most feminist of my friends are resistant to crossing the final frontier of an unkempt bikini line? And why is such a seemingly small issue such a bad thing for feminism?

These days, you could be forgiven for believing that the majority of women are born sans the ability to grow pubes. From magazines to billboards to pornography – even in the case of an instructional birthing video my pregnant friend recently had to watch – women on display have a smooth bikini line. Advertisements for underwear and bathers in particular reinforce the standard of a fur free vagina to the point where seeing a woman with a full bush wearing sexy lingerie looks wrong somehow. All this combines to impart on women and men the idea that a smooth, hairless vagina is not only desirable, but the norm, and anything else an aberration.  Let me state at this point that I firmly believe a woman’s body is her own. If you want rip out all the hair you’ve got and live life totally smooth and hair free, that’s just. It is important, however, that we as feminists question the reason why women are compelled en-mass to make certain choices. To try to understand the motivations that drive them.

The problem with this assumption of a new hairless norm is that once again we are being bombarded with images that reinforce the idea that women are born incomplete. That we require constant vigilance in order to maintain a socially acceptable appearance.  Think about the reaction if just one of the multitudes of billboards around your city that feature a scantily clad woman included a glistening bush of pubes sprouting from her pants. I can only imagine the uproar. I have no doubt that at the very least it would be labelled gross and aesthetically displeasing. Advertisers obviously don’t think the public want to be reminded of the furry, sweaty, smelly reality of the vagina, or that they will consider it desirable.

While many magazines go to the extent of claiming a hairless vagina is ‘cleaner’ (it’s not; hair protects the vagina from infection, that’s why it’s there) aesthetics do seem to be the focal point of follicle maintenance. Another friend of mine, April, got her first Brazilian wax last year (for a bet – she still thinks of it with horror and vows never again to let a stranger pour hot wax on her labia) and the conversation she had with her beauty therapist went as follows:

Therapist: ‘Sorry it hurts so much. You’ve got really strong roots.’
April: (Gritting teeth) ‘That’s fine.’
Therapist: ‘So, do you have a boyfriend.’
April: ‘No.’
Therapist: ‘Oh, well it’s [the pain] worth it then, isn’t it? Hopefully you will after this.’

My favourite part of this story is the beautician’s apparent belief that April attempts to secure a man by running up to potential mates and screaming ‘get a load of this, boys!’ as she flashes them her smooth mound. My least favourite part of this story is the propagation of the idea that men don’t like female pubic hair, and that this is a good enough reason to remove it. Having no actual statistics on the issue, but having obtained empirical evidence from every male in my acquaintance, I conclude that most men are actually attracted to the female form. They want to date a woman, not a child. The hairless vagina made its debut in pornography and has crossed over into mainstream culture. If you are looking for a man whose ideal woman is a based on an image of childish subjugation then yes, waxing may be your only option; otherwise I wouldn’t worry too much about your vagina to scaring off potential mates. In fact, your layer of pubic hair actually functions as a kind of pheromone carpet, which traps your sexy woman musk and lures the boy. Thank you, vagina!

My main concern with the privileging of a hairless bikini line is how much it limits our capacity for fun and spontaneity. Ask a male friend to come to the beach with you and he’ll grab a towel. Ask a female friend and, in my experience, she’ll start to think about the state of her hair growth. Allowing expectations of beauty to limit our fun and enjoyment of life is another way for women to remain subjugated. For as long as our trip to the beach is dependent on the state of our bikini line, women will continue to expend valuable mental and emotional energy convincing ourselves that we need fixing. It simply isn’t true.

Elizabeth, 28, holds an honours degree in Women’s Studies and is currently completing a Masters degree in English Literature. She lives in Melbourne where she tends to her chickens in her free time, and has aspirations toward becoming a full time writer.

8 thoughts on “fur is a feminist issue”