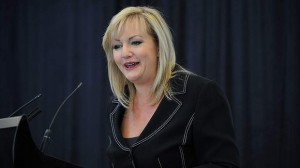 Heidi Victoria, the Victorian Minister for Women, recently claimed that it is ‘naïve’ to think equal gender representation in parliament is possible.

‘By our nature, obviously women are the nurturers in more circumstances than not, so for us to say that there’s going to be equality in Parliament is perhaps naive.’

These were the words of the Minister for Stepford Wives, I mean, Women. It must be recognised that just because Victoria is a politician and a woman does not mean she has to be a feminist. But as the Minister for Women, part of her job is striving towards the betterment of the status of women in her state, and in outwardly stunting the concept of gender equality, she is not doing her position justice.

Feminism has often been criticised as being unrealistically utopian and politically naïve. But in a free and democratic nation with 51% of the population being female, it does not seem unreasonable or unrealistic to expect that the parliament represent half of that population. Some synonyms for naïve are simple, inexperienced and unsophisticated. It seems simple to put women’s lower rates of participation in government down to individual choices rather than broader sociocultural structures of inequality. It seems inexperienced to reduce women’s subjectivities entirely to motherhood and nurturing. And it seems unsophisticated to assume, based on biology, that women are not cut out for the demands of public life. Victoria’s disheartening statement, which in effect calls for us to be happy with our lot, is itself narrow-minded and naïve.

Victoria claimed that because of women’s roles as mothers, they are less likely to wish to engage and excel in politics, making equal representation a fantasy. In Australia, 24% of the lower house and 38% of the senate are women. Contrast this to 27% in Afghanistan’s lower house, 42% in Finland, 44% in Sweden and 56% in Rwanda. In all of these countries women are mothers and yet still manage to participate in parliament.

As minister for women, Victoria does not support affirmative action quotas that strive to get more women up for party pre-selection. Such quotas have allowed more women to enter the Labor party, which is now 37% female, in contrast to Tony Abbot’s ministry of which a mere 22% are women. Affirmative action quotas spark contentious debates around whether women should receive differential treatment in order to achieve equality in the public sphere. Victoria opposes such quotas, believing that they ‘undermine merit.’ The issue of tokenism is pertinent: whilst the need for women to be equally represented in positions of political power and influence is clear, there is also the risk of giving women positions based on their gender rather than their skills and credentials.

EMILY’s List Australia, a Labor women’s initiative to support women in government, claims that ‘When women support women, women win.’ By decrying equality and making essentialist assumptions about what it is to be a woman faced with the opportunity of participation in politics, Heidi Victoria’s statement does not support other women; instead, it contributes to a culture in which women are not encouraged to win in any areas other than mothering, heterosexual relationships and beauty.