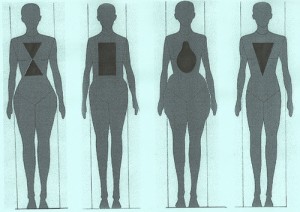 According to Weight Watchers, recent findings have revealed that 63 per cent of Australian women believe a good sex life is important to an individual’s overall wellbeing – not unlike the content we see in some popular women’s magazines. However, about a quarter of these Australian women report having avoided sexual activity on at least one occasion due to body self-consciousness. Around half do not like the way their body looks naked, and report lower than ideal sexual enjoyment.

‘How we feel about our bodies has the ability to impact every aspect of our lives,’ says sexologist and relationship expert, Dr Nikki Goldstein.

However, every aspect of our lives are critiqued and pulled apart by both mainstream and social media, especially in terms of what the ideal body and lifestyle looks like. It is no wonder that women in Australia are feeling so down and out about their bodies.

Just as well that Weight Watchers are providing us with the opportunity to rectify this widespread bodily insecurity, right?

Except that this idea of ‘wanting to look good naked’ and the corresponding high body standards reinforced by the media are capitalised on by the release of subsequent products. You are being made to feel inadequate enough to invest in the purchase of these goods and services. This is why the new Weight Watchers program is resoundingly problematic – they are placing the onus on women to reach those high standards for body aesthetics through a product. The real solution for this quandary can be found instead in critiquing mainstream body culture.

And, let’s be clear: there is nothing wrong in and of itself with wanting a super fit body. What is wrong is the constant internal and external condemnation of women for not fitting into that mould.

These findings which have emerged from Weight Watchers about women’s body insecurities are not new. In one way or another, women inherently know the struggle of not feeling physically good enough against the ridiculous standards set by society. It is part of the experience of being a woman to know that you, and others, are constantly being ‘sized up’, for want of a better term, based on looks. That you participate in that process by judging other women (and are encouraged to do so by the continuous stream of pieces from mainstream and social media doing just that) and by also being subject to it. The woman who ‘has it all’ is typically young, with a perfect body. We throw around terms like ‘yummy mummy’, and the more sexually geared acronym, ‘MILF’. Women who have aged, and therefore have imperfect bodies, are rarely seen in popular media, and are as a result, treated differently.

Weight Watchers are a gear in a larger industry aimed at ‘fixing’ women’s body insecurities by promising them the perfect body – for a fee. The Weight Watchers Black program simply provides a solution to a problem that Weight Watches originally made in the first place.

That being said, promoting sex as an integral part of living well for women – and ensuring that women do enjoy the act of sexual intercourse? That is something new in an industry that regularly dichotomises women into a virginal Mary/demonised whore archetype. And if Weight Watchers Black is part of a new culture that embraces women as respectable, sexual beings – that would be a welcome change to the current attitudes that are reflected in our media landscape.