in brief: lena dunham responds to jezebel’s publishing of her un-retouched vogue shoot 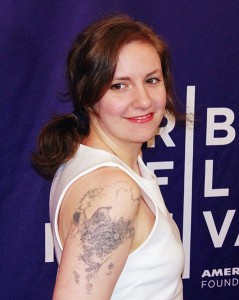 Remember this article that we published here on Lip a couple of weeks ago? Well, Lena Dunham has responded, after keeping quiet about it. She broke the silence on US talk show, Grantland with host Bill Simmons.

‘I think Jezebel is really smart and funny, I think it’s just like once you’ve been attacked that way it’s hard to enjoy.’ Dunham adds: ‘it’s hard to enjoy once you feel like they’ve made such a monumental error in their approach to feminism. It felt gross.’

She then goes on to state that the difference between the before and after photos in the Vogue spread bore little difference in terms of how she looked pre and post air brushing. ‘I felt completely respected by Vogue. I felt like, “thank you for removing the one line from my face because I’m 27 years old and shouldn’t have that there.”’

I have to say, I totally agreed with Lena from the get-go. No disrespect to the Jezebel team at all, but the entire thing felt, well, kind of majorly blown out of proportion. Lena looks awesome in the photos and the kind of airbrushing that was performed was totally minor and barely even noticeable. It was the subtlest of differences and it comes as no surprise that the star herself thinks so as well.

‘Instead of going like “hey, we kind fucked up, these pictures aren’t that retouched, Lena, enjoy the Vogue spread that you’ve been excited about since you were eight years old.” They were like, “she’s not retouched, but she could’ve been.” It was this weird almost political maneuvering that I just had a lot of trouble respecting.’

One thought on “in brief: lena dunham responds to jezebel’s publishing of her un-retouched vogue shoot”