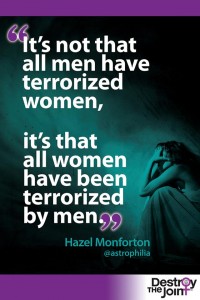 Trigger warning: for violence against women and misogynistic language.

Elliot Rodger has become America’s latest mass murderer. His motivation? A hatred of women. There’s no way to tiptoe around it. Rodger was an entitled, narcissistic misogynist who decided that all women deserved to suffer because he had never had a girlfriend.

On his YouTube channel Rodger posted videos about how unfair it was that girls didn’t like him. ‘Ever since I hit puberty, I’ve been forced to endure an existence of loneliness, rejection and unfulfilled desires, all because girls have never been attracted to me,’ he says ‘Girls gave their affection and sex and love to other men, but never to me. I’m 22 years old and still a virgin. I’ve never even kissed a girl.’

He also posted a 140 page manifesto he entitled My Twisted World, detailing events from his early life up until mere hours before his shooting spree took place. It’s a highly disturbing and disgusting read. In it Rodger calls women ‘mindless-animals’ who don’t deserve equal rights in civilisation. Women are compared to a plague that needs to be quarantined. He details several incidences in which he threw hot coffee and other beverages over young women and young couples in public as punishment either for perceived wrongs or for simply making him ‘feel envious’. He oscillates between wanting to be ‘worthy of a woman’s love’ and ranting furiously about women who deny him the ‘pleasures he is owed’.

Rodger’s parents contacted police weeks before the shooting in regards to the content of their son’s YouTube videos. The police who interviewed him found him to be a ‘perfectly polite young man’ and a ‘kind human being’. In her article for The Guardian Jessica Valenti theorises that the police ignored the content of the videos due to the ‘expectation that violent misogyny in young men is normal and expected’. In his final video he talks about wanting to punish women everywhere and states that ‘I will slaughter every single spoiled, stuck-up, blonde slut I see’.

It is clear that Rodger did not view women as people; the only qualities he listed for his desired girlfriend was that she be beautiful, sexy, tall and blonde. He cared nothing about her personality, her intelligence, her passions or her sense of humour. His potential girlfriend was, in his mind a blank beautiful mannequin there to give him the sex he was ‘owed’; an empty-headed manic pixie dream girl whose mere presence he expected to fix all the perceived problems in his life, who would stroke his ego and affirm his masculinity in the eyes of other men.

Already mainstream media outlets have jumped on Rodger’s self-professed feelings of depression and loneliness. They talk about how he had been diagnosed with Asperger’s Syndrome as a child and had some difficulties with social interaction. I want to be very clear: premeditated murder cannot be attributed to mental illness. We can certainly examine the ways that his personal mental illness may have interacted with his misogynistic views and behaviours, but we cannot simply hold his mental illness accountable for his actions.  The fact is that people living with mental illness are more likely to be the victims of violent crime than the perpetrators. Characterising Rodger as a ‘madman’ throws people with mental illness under the bus and perpetuates the misinformed stereotype that they are dangerous.

Rodger was apparently a member of BodyBuilding.com and PUAhate. He also subscribed to multiple MRA channels on YouTube and also a few ‘pick up artist’ channels including The Player Supreme Show and RSDfreetour.   Pick up artists refer to women as ‘targets’ and use a variety of “guaranteed” moves to “trick” acceptably attractive women into having sex with them.  PUAhate (which has since closed for “maintenance” and removed Rodger’s posts) is an online forum for men to complain about how pick up artists tricks have never worked for them and to rage against women in general. It is an environment where Rodger’s hatred and entitled attitudes towards women was encouraged and even praised.

Last year on the site he allegedly wrote a post encouraging his fellow ‘incels’ (slang for involuntary celibates) to lash out and ‘overthrow this oppressive feminist system. Start envisioning a world where WOMEN FEAR YOU.’ The explosion of #YesAllWomen on Twitter proves, however that that’s the world we already live in. #YesAllWomen was started in response to Rodger’s sexist statements; it is a collection of women’s experiences with misogyny and sexism in their everyday lives.

Rodger operated on the vile assumption that women owed him sex. This sense of entitlement to women’s bodies is clear in the men who decide to beat women, harass them, rape them and murder them. Only a month ago, Maren Sanchez was stabbed to death by a boy for refusing to go to her junior prom with him. The attitude behind such crimes is obvious; if I can’t have you, no one can.

We’re called sluts for choosing to have sex and frigid for choosing not to. Or we’re hurt or killed.  Women are treated like a hive-mind, like each of us think the same, behave the same way and believe the same things. This comic sums up the attitude nicely.  It’s the inability to view women as separate people, as human beings with wants and desires that caused this crime and others like it. After all, Rodger didn’t target individuals who he perceived as having personally “wronged him”; just people who happened to be there at the wrong time and place. Anyone’s suffering was good enough.