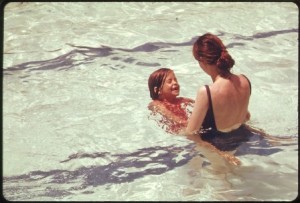 Social media is a battlefield crawling with landmines: people can post offensive and triggering things while using the defence ‘It’s just my opinion’; posts can go viral in mere minutes; activists who use online platforms are criticised for being ‘social justice warriors’ taking things too seriously; and don’t get me started on 4chan. Social media is also a breeding ground for a new take on the competitive sport of motherhood.

My mother can’t stand those ‘Share this if you love your children’ posts on Facebook. She says to me: ‘Of course I love you and your sister, you both know that. Why do the people who share these things feel they have to prove something?’

I think it’s a safe assumption to make that 99.9% of parents love their children, so are these posts really necessary? Perhaps if my own mother and I hadn’t seen each other in years and Facebook was our only method of contact, sharing those posts as a nice reminder might make more sense. However, when I see the mothers of very young children sharing those posts, I get a bit confused; not only do these children not have Facebook, but they can’t even spell ‘Facebook’ to type it in a browser. The message being put out there clearly isn’t for children, so who is it for?

I’ve never seen one of these posts on my newsfeed and said to myself: ‘Well, I saw Joan tell her son off in Woolworths the other day for throwing items out of their trolley and on to the ground, but she just updated her status and said that she loves her little boy. Phew, what a relief! Here I was thinking that she was a horrible excuse for a mother, but now I see that she clearly does love him!’

Posts about motherhood typically have very subtle competitive undertones, and almost always exclude other women. For example, to quote a picture that was shared on my newsfeed a few nights ago; ‘I’ve carried a child within my body… My body isn’t magazine perfect, but when I look in the mirror I see a MUM… and there is no greater honour, love, or blessing!!! Post this if you are a very proud Mum xxxx [sic]’. Posts like these are undoubtedly supposed to arouse warm, fuzzy maternal feelings in women, but they just piss me off.

Of course, I always have the option to block certain people’s posts, but that is not the greater issue here. Maybe I’m being too sensitive, but when I read posts like that I get a sense of a maternal hierarchy etching its way onto social media. This post suggests that you can only be a proud mother if you have carried a child and you have an imperfect ‘Mum’s body’ as a result… but what about women who used surrogates to carry their children? What about women who adopted children? Are they less of a mother for not fulfilling these ‘traditional’ criteria?

Most importantly though, what about the women who can’t, or don’t want to have children? To quote the post from the previous paragraph, there is supposedly no greater honour, love, or blessing, than being a Mum. I wonder what child-free women feel when they see posts like that? My guess would be that they feel judged and shunned by other women, and by society as a whole for not fulfilling the “destined female role” of motherhood.

We’ve all seen something along those lines on social media, whether it be pinned, reblogged, retweeted, favourited, shared, or liked; ‘You never know true love until you see your child for the first time’, ‘You never know true sacrifice or pain until you have a child’, etc. Translation: sorry child-free women, you can’t experience love or pain or sacrifice; you can’t contribute something meaningful in your lifetime; you’re not a natural woman, because you have not had children.

Having children or not having children is a choice that no one should be pressured into; regardless of which is chosen, you have the right to be proud and celebrate that choice. And while we all have the right to post what we like on our profiles, we should be very careful about the language we use and the implications of what we say (online or in real life) about fellow women.

Society has made motherhood as competitive as it is today, and social and gender norms have pigeonholed women into becoming mothers. This is sexist and further reveals double standards, as child-free women are dubbed selfish and unnatural, whereas men who have no children are dubbed neither of those things.

I realise that there could be underlying reasons why mothers might share these types of posts: they might need a self-esteem lift or a reminder that as a mother, they are doing a good job; perhaps they are simply proud. Ultimately though, these posts only contribute to a new way of judging women by their reproductive abilities.

Women should not be pitted against each other, however unconsciously, for having or not having children. Where are the posts on social media that say ‘I do not think I am above other women because I have had children and they have not’, or ‘While I personally feel blessed to be a mother, I do not believe that motherhood should define my entire sex’? Now, those are the types of posts that would make me hit “Like”.