my boyfriend saved my goldfish! or, why feminists can still let people (even men) do things for them 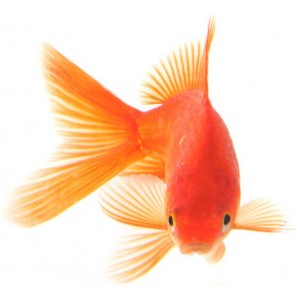 I have never before given a shit about a fish. I grew up with goldfish after goldfish and even named some of them, but barely cared or even noticed when they died. I had somewhat more sentiment for my rabbits, but my reaction to their deaths was also pretty cavalier. The prospect of my dog dying has, conversely, incited much fear and anxiety, but fortunately he seems to be kicking on for now.

So I was surprised when I saw my goldfish the other afternoon, his abdomen bloated, floating on his side, and barely moving, and felt rather distressed about his condition. Maybe it was because I’ve never been the one to have to deal with a pet’s death, or maybe it was because I’m now living alone, thus leaving me solely responsible for Alfredo’s life.  And when I whimpered to my boyfriend, ‘what’s wrong with my fish?’, I was expecting a consolatory pat on the back, implying his imminent death.

Instead, he diagnosed Alfredo with dropsy and made a fish hospital for him. By the next night, the swelling was gone, and Alfredo was upright and swimming once again.

But this isn’t a post to educate you about fish health (because, as I’ve said, I both don’t know and tend not to care about fish).

Over the past couple of months, I have frequently been accused of being a bad feminist because I have asked or “allowed” men to help me with things, like examining the panels on my car (I have, incidentally, also just found out what a panel beater does), fixing my shower taps, reprogramming my TV, and yes, saving my pet. Though I generally consider myself a pretty capable and crafty person, somehow these skills have managed to evade me for 24 years.

While I was certainly guilty of playing damsel in distress in my younger youth so as to avoid carrying stuff and climbing up ladders (and granted, I do often take advantage of the ridiculous OH&S guidelines at work that state women can’t lift heavy things), I have simply found more recently that it has been the dudes in my life who tend to have a lot of practical skills that my female friends do not (or possibly they just spend less time talking about their ability to fix a dryer).

No doubt it’s symptomatic of it being more acceptable to complain about not knowing how to do something when you’re a female, and the fact that looking helplessly at a man tends to yield results in getting done whatever it is that you need (hey, I’m not saying it’s cool, I’m just saying it works) but as it stands, it’s guys that I’ve found more useful to ask about replacing showerheads and tyre pressure.

Before you need a moment on your fainting couch to recover from what appear to be my anti-feminist sentiments, I’ll get to my point: it is totally fine to ask men for help. What is not cool, however, is to exploit the aforementioned gender stereotypes to avoid learning how to do things yourself (unless you’re going to pay someone to do it).

Since living alone especially, I’ve started taking note of the things that guys seem like they were just born knowing how to do, because I’ve realised that they weren’t; at some point they had to learn too. They probably just had a head start because they played with fake toolkits instead of dollhouses when they were small.

Just like I would expect someone, whether they be male or female, to learn how to sew on a button or apply liquid eyeliner after they’ve seen me do it a couple of times rather than always getting me to do it for them, I do try to learn from others when they assist me so I can do it myself the following time. And it makes me feel pretty awesome when I fix my own internet, or make a dish for the first time, or know whether a set of fairy lights is going to electrocute me.

You’ll never know how to do absolutely everything in the world, but for those basic things here and there, it’s pretty handy to know how to do them yourself and males can be a pretty handy resource (my mum is an electrical engineer, so I’m well aware that women know things too, but again, it’s been my experience of late that my boyfriend/man friends/dad know how to do more of the DIY things that I’m useless at).

But if you don’t derive any gratification from knowing how to fix things yourself, I don’t think there’s much point in exerting yourself trying to do so in the name of being a fiercely independent WOMAN. Just don’t bat your eyelashes to get shit done; get out your Yellow Pages instead.

Dunja Nedic is a former Lip columnist who now just writes bits and bobs here and there about this and that (but mainly music and feminism). You can follow her on Twitter @DunjaNedic or check out her blog at http://sexloverockandroll.wordpress.com.

One thought on “my boyfriend saved my goldfish! or, why feminists can still let people (even men) do things for them”