onsens on point: lessons on body image in japan 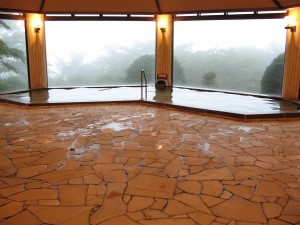 As a little white girl, naively comforted by the romances of Madame Butterfly and Disney’s Mulan, I had developed a pretty enduring schema by which to evaluate Asian women: they must either be supplicants donning opulently embellished kimonos, or they must be men. By the time that movies like Godzilla and Aloha came around, with actors Matthew Broderick and Emma Stone playing characters intended to be of Asian ethnicity, I figured that they didn’t have to exist outside of their own cultural domesticity at all. If the Western world, culturally at best and ubiquitously at worst, dominated the world’s perspective of what normal gender roles were, then how could the sidelined East get a look in and state their case?

I was lucky enough to expand my horizons in subsequent years, being educated by women of colour about what their culture and gender meant to them. But despite all of this cultural education that I was lucky enough to receive, it appears that I hadn’t broken out of the little white girl mindset quite enough, because I still found myself sitting in a Japanese Onsen (or public bath) totally amazed by the candid way in which Japanese women wore and exhibited their bodies. For those privileged enough to have experienced a spa environment in Australia, you will know that there is generally an undies-only policy. Let your boobs hang free, sure, but if the panties come down, be prepared for some wary stares.

Yet here, in the middle of this hyper-traditional, 16th Century town in northern Japan, little preschool-aged girls were being comfortably undressed by their school teachers and bathing together with members of the public, totally naked and totally unaware of it. It was – perhaps ridiculously so – the most radical and genuine experience of natural femininity I had ever witnessed. In a Western country such as Australia, where suspicion and fear of ‘perverts’ has reached such heights that gender-neutral bathrooms have been decried as a threat to the innocence of our vulnerable youth, it was wonderfully refreshing to see some normality restored to the act of embracing the female body in such a natural, non-sexualised way.

This brought the cogs in my Madame Butterfly schema to a grinding halt: aren’t Japanese women supposed to be chaste and conservative? Aren’t they supposed to blush and faint at the sight of a bare elbow? Of course I realise this is not and never was the case, though I undoubtedly had some alarmingly Orwellian double-think going on regarding Asian women’s agency over their own bodies. Still dumbly fascinated, I decided to ask a few of the women who worked around this area for their opinions of bathing in the Onsens, and how they feel they must present themselves both in front of and behind closed doors.

One of these women was Aki, the lady who worked at the reception of a ski resort not far up the road. I was possibly one of the only people in that area who had no clue how to deal with snow or ski slopes, so I assume she must have taken pity on me as she lent me a five-year-old’s Hello Kitty sled for the day. She was kind and eager to talk, so I began asking her about her experiences with the Onsen baths and if she had always felt comfortable using them with other women. Her response was forthright and hopeful.

‘I think in Japanese society, women are happier than we would have you think,’ Aki said. ‘We are comfortable with one another, and we are able to use the traditional anchors of our culture to find common ground with each other. I very much love the Onsen baths and they are actually one of the places I feel most comfortable with myself. More so than in public, or around men.’

Not only were Aki’s views empowering and sincerely body-positive, but they were also plainly evidenced by the society that surrounded her. Every single woman that I spoke with around the Shiga-Kogen area shared this perspective, and felt that it was totally natural to openly share spaces with other naked women, without limit to girls of any age. So who’s the backwards one here? My time in and around Shiga-Kogen, soaking away in the Onsens with a host of other women, was one of the most liberating and educative events of my travels thus far, and if I have one thing to say to Aussie ladies back home, it’s this: whether you’re black or white or purple or blue, one-legged or two-legged or three-legged, women should be comfortable with and among each other. If we feel that we have to hide the feminine form from even ourselves, then what lessons have we equipped ourselves with to pass on to society as we attempt to humanise and normalize our bodies? How are we teaching our daughters to view their bodies? It isn’t a gaze of respect and acceptance, but of shame, detachment and stigma.