[WARNING: This article contains spoilers for the film Gone Girl. Read on at your own risk. -Editor] 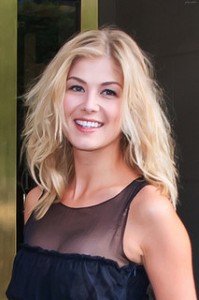 Rosamund Pike, who plays the titular villain in Gone Girl.

Female villains in film, if well executed, make for interesting, complex and credible characters. As audiences, we do not see enough of them. Recently, a film adaptation of Gillian Flynn’s best-selling novel Gone Girl was released in theatres and portrayed its female villain, Amy Elliot-Dunne, as highly intelligent, manipulative and psychopathic. These qualities, often showcased as ‘masculine,’ are not commonly seen in villainous female characters and therefore should be celebrated. However, it cannot be these typically untraditional characteristics in female antagonists alone that define them as distinguished villains.

The complexity of Amy as a character and moreover, as a villain, is to be admired. At first glance, audiences have a spunky and hip, blonde bombshell who swiftly morphs into a deadly and powerful woman capable of faking her own death, framing her husband for murder and slicing a man’s throat with a box cutter. On closer inspection though, Amy’s “transition” into this somewhat unrecognisable woman is not so much a metamorphosis as it is an unravelling of her psychopathy. Amy isn’t suddenly manipulative and psychopathic: she has always been, these traits have always lurked beneath her cool exterior. It is this unravelling of Amy’s dark persona that makes her a unique villain, although not necessarily an agreeable one.

As audiences plunge deeper into Amy’s twisted psyche, they’re faced with a character—or rather a story—that lacks credibility. Throughout the film it is revealed that Amy makes numerous false accusations of rape and domestic violence. This includes claiming her husband Nick was physically and sexually violent towards her and that her ex-boyfriend Desi kidnapped and raped her. Another former partner of Amy’s comes forward with claims that he too was a victim of Amy’s false rape accusations. The film also exposes Amy has impregnated herself using Nick’s sperm, which she had secretly stored away. Nick is shocked by this revelation because he formerly believed his sperm sample had been destroyed. Amy uses her pregnancy as a means of controlling and imprisoning Nick.

Of course women can be abusers, manipulators and psychopaths and it is always refreshing to view those rare depictions on screen. However, most women do not fabricate stories of sexual assault. The problem with our female villain falsely accusing men of rape and proceeding to “sperm jack” a man, is that it perpetuates misogynistic myths already thoroughly engrained in our society and detracts from social realism. Although the chances of false rape accusations are extremely low, negative attitudes towards real victims of rape and domestic violence are shockingly high. In Australia, one in five believe women who are intoxicated at the time of their sexual assault, are ‘partly responsible’ for it. This kind of victim-blaming system combined with harmful myths surrounding false rape allegations, promotes a toxic environment for rape and domestic violence victims and women in general. Gone Girl does nothing to discredit this type of misogyny but rather attaches an underlying misogynistic agenda to its female villain.

The other problematic element to arise from Amy’s character is the way in which her rape “accusation” is received. When victims of rape report and recount details of their traumatic assault, it often results in intense questioning, accusations that the victim was “promiscuous” or somehow “asking for it”, and social isolation. Rape victims’ claims are not as easily accepted as Gone Girl would have audiences believe.

Numerous films have depicted the female villain better than Gone Girl. The film What Ever Happened to Baby Jane? (1962) tells the story of Jane Hudson’s jealousy over her sister’s successful career and the torture she inflicts upon her. Kathy Bates’ character, Annie Wilkes in Misery (1990) keeps a man captive and tortures him if he does not fulfill her fandom wishes. Girl, Interrupted (1999) shows Angelina Jolie as the charismatic and manipulative Lisa Rowe, a sociopathic woman in a mental institution. Tarrantino’s Kill Bill series depicts an epic cast of villainous and violent female characters, including, Elle Driver, O-Ren Ishii, Vernita Green and Gogo Yubari (a psychopathic seventeen year old). Meryl Streep in 2006’s The Devil Wears Prada is icy and unsympathetic as Miranda Priestly. And of course, Imelda Staunton is perfectly antagonising as Harry Potter’s Dolores Umbridge. The list goes on and on.

All of these characters make for more adequate villains than Gone Girl’s Amy for several reasons: they each adhere to villainous characteristics in various ways, they challenge audiences, are complex and unique in nature, and most importantly, none come up with misogynistic undertones.