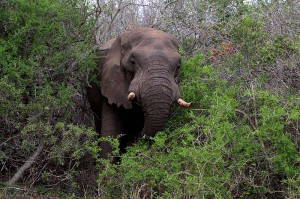 I have just had the privilege of spending three days at a game reserve in South Africa. Each day I would rise at 6am, climb into an open-top range rover with a ranger and tracker and drive out to spot creatures of legendary strength and prowess. On our first morning we rounded a corner and stumbled upon a bull elephant. The 15 year old was a little guarded about his territory and harrumphed menacingly, knocking over trees to demonstrate his superiority.

Later, as we ate lunch back at the lodge overlooking a popular watering hole, a tower of giraffes serenely walked past to quench their thirst. We watched as one very slowly and deliberately studied her surroundings before spreading her front legs, beginning the slow descent from her lofty view all the way down to the watering hole. After lapping the water for a few seconds she quickly flicked her head back up to her considerable height to check for any sign of predators only to repeat the careful and deliberate process again and again.

I was awestruck watching this awkward but graceful dance. It made me consider that giraffes, indeed all of the great animals I had observed, not only have to be wary of natural predators but also of gun-toting big game hunters such as the now notorious Walter Palmer and Sabrina Corgatelli, a woman from the United States who recently travelled to South Africa for the sole purpose of hunting and killing African game.

As the free for all that is social media frenzy descended on these two big game hunters, massive amounts of attention was drawn to the plight of African animals. We, mostly, don’t understand why anyone would find pleasure in taking the life of an innocent animal. Unfortunately, the vitriol leveled at these hunters, in particular at Corgatelli, has done very little to highlight the arguments for and against this morally conflicted pursuit.  As I explored the issue of ‘trophy hunting’ with people working at the reserve, I began to see that a limited lens had been placed over the scope of understanding on this issue and that the subject is far from black and white.

It is a difficult fact for people to swallow – including me – but big game hunting delivers far more funds to conservation than eco-tourism. It provides struggling African nations with an economic incentive to invest in the conservation of their animals in order to bring in the tourist dollar – a tactic that has proven to be far more effective than black-tie fundraising galas. A leading conservation expert, Rosie Cooney, recently stated that bans on trophy hunting at various stages in Tanzania, Kenya and Zambia accelerated a rapid loss of wildlife due to the removal of incentives for conservation*.

One of the people working at the reserve pointed out that while the world is up in arms about trophy hunting, the black rhinoceros is being hunted to the point of extinction for their horns on the misguided belief that they possess aphrodisiac properties. This horrific practice has absolutely no scientific basis and once the horns are removed the rhinos are left to die. There is no money being invested in their conservation and yet, sadly, this activity does not provoke the outrage served up to big game hunters on social media.

A further baffling gap in logic that has emerged around the issue of trophy hunting is the way that people have used the conservation platform to launch personal attacks that have little or nothing to do with the matter at hand. The attacks on Corgatelli on her Facebook page were nothing short of breathtaking ranging from urging her to ‘…go be a stripper’ if she needed an ego boost, while another user remarked she was ‘probably sexually abused when younger and now she pretends these gorgeous animals are men’.

Whether or not one agrees with the actions of Corgatelli, her sexual history, imagined or otherwise, has nothing to do with her hunting activities. Obviously people are going to react passionately to the actions of big game hunters. What troubles me is the complete lack of debate regarding reasons for and against big game hunting and the venom being spewed onto social media about Corgatelli’s appearance, real or imagined sexual history or both. Which leads me to the troubling conclusion that these people are not really invested in the protection of animals but simply want to put down a woman’s actions by using the tactic preferred by misogynists throughout history – shaming a woman’s sexuality.

Humans like to get righteously angry. That surge in our bellies as we bash out passionate sentences on social media platforms in response to people standing proudly next to a carcass feels good. So what if a few people call Corgatelli a slut online? She’s an animal killer! Meanwhile, we are ignoring the fact that big game hunting is far more complex than we understand. When I look at the images posted by Corgatelli and Palmer standing proudly alongside the animals they have just murdered I am repulsed and horrified. However, I now have a far greater understanding of predators of all kinds, those you find in the jungle and online.

* Source: Rosie Cooney, Chair of the International Union for the Conservation of nature and natural Resources Commission on Environmental, Economic and Social Policy, The Times, Tuesday 4 August 2015, p. 13.