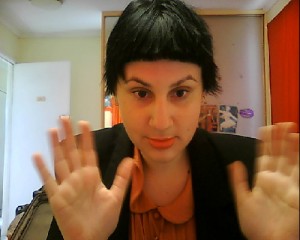 I have been writing for Lip since 2009. When I first started writing, fat acceptance was only a fledging concept in my mind – I had a rough idea of what it was, mostly through livejournal communities such as fatshionista and I had a rough concept of what exactly “fatshion” was as well.

It’s no surprise that my feminism and fat acceptance go hand in hand. I don’t think I could have one without the other in my life. My activism is so closely linked with my body, my femininity and sense of self that I can’t separate, nor do I want to.

I’ve written over 150 articles for Lip, mostly on the subject of fat, feminism and fashion. I’ve said time and time again that I believe fashion is a feminist issue and a political issue and identifying as a fatshionable woman who is also a feminist is incredibly important to me. If clothes make the (wo)man, then what does that person do when their choices are stifled? How can they express themselves truly if their options are limited?

It’s a question I’m still asking, years later, and one I’ll probably continue to ask of retailers. Fatshion is a little better than it was back when I started, with numerous independent retaliers opening up shop, that do have a large variety of sizes and Etsy sellers that are willing to custom size as well. I know I would prefer to give my money to someone who is happy to have my business, not just online but in person too.

I still believe being a fat woman and being loud and proud about being so is an important political act. Refusing to be ignored and pushed into the background is a powerful choice for many fat people.

I’m glad there are sites like Tumblr around, where people can see fat bodies and engage with each other. Normalisation is a key to combat stigma and fat discrimination, which is still (and probably, pessimistically, I know, will always be) around.

I’m proud to have fat activist friends and events, so I can discuss issues with like-minded people in person as well as online. I’m glad my space is a diet-free zone, with no body judgement or negative body talk. That is not to say that people aren’t allowed to vent from time to time, or have to be 100% positive and self-loving all the time. I recognise we all have shitty days; we’re all influenced by outside media and people, even the people who love us can influence us negatively, while meaning to or not. But I’m still happy my bubble is a mostly body positive zone because the outside world is not.

I’m glad to be leaving Lip on a high note and I’m so pleased to have written for the site all these years. I wish everyone at Lip all the best for future endeavours and I hope to see the site grow more. Thanks for having me, Lip.