the lip crew on body image 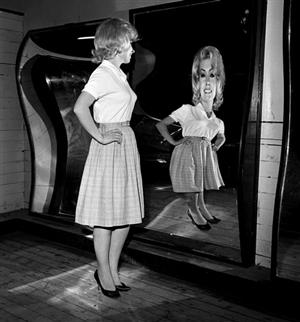 ‘I like my body. There, I said it, *middle finger to everyone who ever called me a plethora of sizeist insults*. It’s not model-grade thin or athletic, and it’s not perfectly curvaceous like Christina Hendricks’, but it’s a body I can finally live with after years of not liking the way it looks. I can accept it despite its stretch marks, cellulite and other strategically stored flab for when I have an alien hosted in my womb (not my strategy, but hey, just in case it does happen, thanks body!)
Feminism and the preaching of my Aunty Gok on How to Look Good Naked have really helped me accept the way I am and know that the way I look is not indicative of my value. Unfortunately, not everyone has been exposed to such helpful ideas. It’s a shame that others feel compelled to look like what they see in the media – i.e. model-grade thin, athletic, or having ample assets in the breast and booty department.
As a journalism student, I do get tired of hearing the flack about the media brainwashing people to do this, that and the other. Occasionally this includes the assertion women and men alike are tricked into believing femininity and masculinity must look a certain way, because I feel – to an extent – able to ignore the media’s message that a certain body is the be all and end all. That being said, you can’t ignore the influence of the media as it is reiterating the ill-fated priority beauty is given in our society. (If you’re into Communication theory, check out my old pal Stuart Hall’s work on decoding.)’ – Sarah Iuliano, Writer

‘We should strip “fat” and even “skinny” of their power and stare at them until they become meaningless. Obviously, norms of beauty come and go and what a “normal” body is should not be prescribed. What really matters is that we are reasonably healthy and clean and that our relationship with eating is healthy too. I spent most of my teenage years regarding my body as something alien and unsympathetic but all the worrying about what I perceived as bodily defects now seems slightly silly. My scoliosis is a case in point: it worries me endlessly but on revealing to someone that I have it, it becomes clear they hadn’t even noticed. Don’t spend your lives obsessing about the circumference of your thighs; the idea that we have to be “super toned-up” and that any excess fat is unacceptable is just ridiculous.

Still, the media sells a highly sexualised body image which has been described as damaging to young girls’ self-esteem, promoting a fixed and unattainable body ideal, as well as propagating limiting gender and sexual stereotypes. Most troubling is that it can often only be achieved through extreme dieting or surgical modification. In doing so, the media exemplifies the oppressive and subjugating forces of a social structure that reduces women to their bodies and appearance. This is nothing new.

But is the paraphernalia of stereotypical femininity at odds with feminism? In order to have the “perfect body” we need to, literally, buy into traditional femininity, it’s femininity through acquisition. Using makeup doesn’t mean we’ve been duped by the patriarchy. We’re not passively accepting things. We shouldn’t disparage the ways girls choose to enact their femininity. However, feminism too has been subject to processes of commodification. Post-feminist rhetoric seems to sell traditional femininity and girliness back to women as a new mode of empowerment (think of any female pop-star). The notion of choice is emptied out of its political content and repackaged. But there’s a thin line between irony and the reification of traditional gender stereotypes and body ideals. It’s an individualist, consumerist idea of empowerment. We need to make sure we’re not glamoured by this idea of girl-power; there is a danger that this pink-packaged femininity has given way to pink-packaged feminism.’ – Camilla Patini, Writer

‘I think most of our discussions about body image miss the major point that body image is a secondary concern. The primary concern is that girls’ and women’s sense of self-worth is so tied up with how happy they feel about their bodies as to be indistinguishable. For instance, if I want to lose weight, it doesn’t mean that I think I’m less clever, funny, generous, capable or any of the other things I like about myself. It just means that I want to lose weight. Except, it doesn’t just mean that, but a whole bunch of other stuff as well.
Like: I want to lose weight because I want to be seen as an awesome single 30-something rather than a sad single 30-something and a big part of being successfully single is being thin because clearly you’re choosing to be single rather than it being a default position because no one wants you.
Maybe I want to lose weight because then I’ll be closer to the acceptable shape for a woman.
Although maybe I don’t want to get thinner because if I don’t have enough weight on, I feel like women in feminist circles will think I’m a bad feminist.’  – Sarah Jansen, Writer

When young boys say they want to be bigger, what they mean is they want to be taller. I know, I was always relatively small, and I’m still not exactly big. But it was as simple as a matter of height. Grown-ups are tall. Grown-ups can do what they want. I want to be a grown-up. I want to be taller. Big means something different now, to boys and soon-to-be-men, and it’s reinforced again and again at every turn. Now, big means muscle-bound. Big means ripped, cut, shredded. Words like BULK, PUMP, and PROTEIN are in common usage amongst groups of teenage boys everywhere. Somehow I missed the moment when huge tubs of “massive weight gain” powder and pre-, post- and during-workout energy supplements, bars and gels moved from body-building gyms and onto the health food shelves of supermarkets. And while boys and young men are being told to get bigger and bigger, the ever-present pressure on girls and women to get smaller and smaller increases. Standing in the supermarket yesterday, I heard the pink and purple lettering on the packaging of diet-shake mixes, appetite suppressants, and meal replacements, yelling aggressively at women to LOSE, SLIM, SHRINK, and FIT into the expectations of men, other women, and the entire marketing industry.’ – Toby Newton, Writer

‘After years of caring about how I look, what I weigh and how smooth my skin is, I’ve come to the conclusion that body image is not something worth caring about. As there are so many more important and more fulfilling things in life to care about, I feel angry that concern for body image has taken up so much of my time; and I am deeply saddened by the damage that body image concerns have done to mine and others lives.

Unfortunately caring about body image seems to have become the way of the contemporary world. Throughout my life I’ve seen friends and others around me waste their life trying to achieve the perfect body. Among almost everyone I know it seems commonplace to go to the gym everyday to lose or maintain weight, categorise foods into “those that will make you fat” and “those that are safe,” and to adorn products and make-up before stepping out of the house.

Not only do these practices take up a significant amount of people’s resources and time, but they also, more often than not, have a negative impact on people’s lives. In Australia and other countries in the western world there has emerged an epidemic of body dissatisfaction, and body image related illnesses such as Anorexia Nervosa and Bulimia are growing. Concern with body image has a negative effect on people’s physiological, social and psychological health.

While I’ve spent a long time myself being consumed by what I look like, I prefer it now that I have a life.’ – Heidi La Paglia, Writer

‘I used to be a “real women have curves” person until I realised how counterproductive positive body image messages like this one are. Counterproductive and very simplistic.  (Euphemisms like “fiercely real” are also very patronising.) More and more I’m concerned with promoting good health and body acceptance in a way that includes all shapes and all sizes. At the same time, there is a very real social payoff to being thin. I don’t think it’s possible to advocate for body acceptance without acknowledging this fact. Yes, we should extend positive messages to all people but we need to deal with the reality that already, at a young age, people are taught that anyone who doesn’t conform to the “ideal” body type – able, thin, cis-gender etc. – is failing somehow; or that they deserve certain professional and social consequences. Admittedly I’ve never looked to formal campaigns to deal with body image issues; I don’t know how helpful they are. I do know that greater representation in the media and taking care of my general health have made me feel better about my body than any “love yourself” tagline ever has.’ – Shannon Clarke, Writer

‘For me, I had an awful body image up until my early twenties. I used to diet with my friends and we’d practice strengthening our “starving” powers in order to get skinny and fast. What’s changed is the fact that as maturity sets in, you come to terms with what’s realistic and what’s not. The even better thing is finding peace in who you are on an exterior level. Maturity is about acceptance and acceptance means drawing to a close the battles you’ve fought in the past. I used to get extremely hung up about my legs. But now I know, that people see you as a whole being as opposed to segregated sections that we believe they do because that’s how we see ourselves. Today, I have a strong and positive outlook of who I am. What’s more, it’s a temperate outlook devoid of the exaggeration and drama that’s synonymous with being young. I think, eventually, most of us arrive at a place psychologically about our actual identities, which leads us to see our exterior differently as well.
You have to start divorcing yourself from the context of others and to try and see yourself as someone who’s an individual.’ – Yalei Wang, Writer

‘I’ve struggled with my weight since I was a teenager, and as a result the way I feel about my body has long been a source of drama. As I look back, what is most interesting is the way that my body, its size and its shape has not just affected my relationships with people I don’t really know (Colleagues who make fat jokes behind my back and people who write “no fat chicks” on internet dating profiles – I’m looking at you), but also those with the people whose opinions hold deep sway in my mind, whose praise and kind words truly warm my heart. My family, while being loving and caring, have also issued the occasional, “You’d be so pretty if you lost some weight”.
When I examine them, these words strike me as soul-piercing. For a long time I believed that I wasn’t worthy of love (or respect, kindness, dignity…) because my body was too large, unwieldy, unattractive.
It’s taken me a long time to come to terms with the body I have; to understand how it got to this state; and why, not just if or how I want to change it.
For the time being I look to awesome, inspiring people like singer Meghan Tonjes who remind me to see my body as the amazing, incredible being-carrying vehicle that it is, and that I control how I see my body – not randoms in the workplace or internet, not my friends or family. Me.’ – Jay Mortlock, Writer