the lip crew on identity 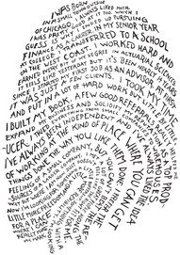 ‘Identity is something that I definitely struggled with throughout my teenage years, but thankfully that struggle has now (mostly) passed. I know who I am now and the things that I want, but of course, I am still working out how exactly to obtain all of those things and how to become “fully me”. I think that in our modern society it is very hard to establish oneself as unique – the increasing use of technology and social media doesn’t help the cause, as it has become super easy to access the identities of billions of people and use their ideas to your advantage and sometimes, to their disadvantage. Not only that, but uniqueness is still not a celebrated thing – we still put great emphasis on being pretty, skinny, smart and happy but we don’t make it OK to be overweight, unhappy and silly – all things that may or may not be necessarily bad and may just be unique to an individual. So, to really celebrate identity and possibly make it easier for young people going through puberty and big life changes, we should make differences less scary. I know that growing up, if I had thought it was socially acceptable that being a girl who likes playing sports, drinking beer and watching sci-fi flicks wouldn’t be taunted off as “lesbian-ness” or “tomboy-ness” then I wouldn’t have hidden my true self so much. Nonetheless, I got over caring what others thought anyway, so here I am: 24 years old and I don’t watch Girls or listen to Beyonce, but I am happy with that, and have found people who accept me for who I am, despite not fitting into one distinct category.’ – Bridget Conway, Editorial Assistant (News)

‘Every time I go to work, my signature look is (lazily, casually) complete: bright lipstick, a colourful scarf somewhere amongst my frizzy hair, thick cat-eye liner around my baby blues. While I’ve never been one of those women who fuss over their appearance (I can stand ten minutes in front of the mirror, max) putting on make-up could be described as an act of stepping into character. It’s part of the ritual of presenting myself to the world. Who am I beneath these delicately drawn lines? Is my unprotected self more authentic than the one I subject to the harsh glare of other people? Only I can answer these questions. But we must admit that, seemingly at least, our world forgoes identity for image. We live in a time where our physical self is reflected to us in an unprecedented number: mirrors, social media, even my damn email flashes my toothy smile at me whenever I log in. And increasingly, thinness is associated with fitness, and fitness with either weakness or strength; our physical self is seen as a representation of our moral being, our inner character. With all this focus on our appearance, I ask: how much time are we spending on developing and strengthening our inner self? Our identity means our unshakeable understanding of who we are. Honestly, underneath that pretty hair, beyond that tummy you’re trying to hide, what defines you? What are you all about? Only you can answer these questions.’  – Lou Heinrich, Film + Literature Editor

‘Some find their identity late in life; others quite early. I was the latter. Although over the years my tastes have altered slightly and I have discovered new things, I have always been the same. Technically, I guess I have always been “different” – that’s my identity. I come from a small town where everybody seems to be similar. They all dress similar and think similar; I have never really understood it. In turn others haven’t always understood me. I’m a dreamer in a practical world and ever since I was a child I tended to do the opposite of everyone else. Majority of the time that’s what came naturally to me. Kids at school were never into the same music as me, never wore the same things as me either. Some girls hated me, I think boys were more scared by me but there were people who understood me. They weren’t the same but they respected my opinion and understood my crazy sense of humour. I’m a passionate person – when I love something I truly become obsessed. Thankfully this usually applies to celebrities only. I am a diehard Silverchair fan – I have a large collection of all their memorabilia, albums, records, you name it! I knew everything and I think in high school they became a big part of my identity. They still are, too. I just wish I could see them again. Lately I have added a new section to my identity; this was a big shock to everyone. One Direction. Maybe they aren’t exactly different but they are different for me.  To summarise, my identity is made up of a combination of things: my “obsessions”, my creativity, my heritage and my uncontrollable tendency to just do things differently.’ – Shannon O’Keefe, Writer

‘I remember during the Olympics in February when the Canadian men’s hockey team won the gold medal. A few days earlier, the Canadian women won so it was a Very Big Deal. Again. I was on the train going to school on a Sunday morning surrounded by people celebrating in red and white, waving flags and heading to bars; I felt pretty Canadian then. That is until the next time someone asked me where I was “really” from. I felt pretty Barbadian after that, even though I’ve spent no more than three months there. At different points in my life I feel the weight, responsibility, and pride of taking on many different identities:  Canadian, West Indian, woman, cis-hetero, disabled, feminist. (In addition to a whole lot of others…student, millennial, Westerner, daughter etc.) More and more I understand that a lot of what I associate with these identities isn’t actually determined by me. No matter what I think it means to be a woman, or a Canadian or a feminist, other people’s expectations are added to those perceptions. That’s not always a bad thing. I think it’s a basic right of everyone to self-identify, and determine what those identities mean to us. The challenge is balancing that with the implications of the identities we take on and how that fits into a larger social world. A lot of what people believe they know about our gender, sex, orientation, race, ability, nationality, religion etc. is really subjective but there are certainly valid arguments amid the nonsense. For example, if I take on the identity of a Westerner, what does that mean for me when I travel and what are the responsibilities and consequences of that identity? Similarly, what does it mean to be cis-hetero in a heterosexist, cis-sexist society? Those questions matter.’ – Shannon Clarke, Writer

‘I shape my identity and it is not synonymous with what others deem my reputation. It is unfortunate that we as human beings are subjected to others’ conceptions of who we are. As social beings, we’re conditioned to want other peoples’ approval. But we shouldn’t let this shape us too much.That is easier said than done, because I am certainly not immune to others’ scrutiny. I don’t want to go all cosmic cuckoo on your arses, Lipsters, but as a Gemini I feel I have multiple identities. Not every facet of who I am is out there 24/7. To name a few, there is Sarah the writer, the feminist, the vegetarian; Sarah the philosopher (who coincidently seems come out at the same time as her friend, Sarah the drunk). Sarah the this, that and the other: they are descriptors, labels of different versions of the same person. They often intersect, but they’re not always on the frontline. Sometimes they are lying dormant just beneath the surface waiting for the right moment to present themselves. One day I hope they can all coexist, out and proud. I am fortunate enough to have all these Sarahs exist in a place where they are allowed. I fear to think of a society which would not allow me to be any of these, albeit there could be some good of not allowing Sarah the drunk to rear her off-her-face head. These Sarahs will be one version of Sarah in time. It is just a matter of summoning one final character: Sarah the strong.’
– Sarah Iuliano, Writer

‘We are surrounded by the idea that mental illness is an inherently bad thing. But for me it isn’t. It’s actually a positive part of who I am. It’s given me wonderful insights into what it is to be human and a sense of depth in my life that I don’t think I could have had otherwise. I remember telling the disability adviser at my university of my mental illness. “Oh, you poor thing” was her response. The truth is I am a richer person because of it. Yes, it is challenging. The two years I spent having full blown panic attacks almost daily, for example, was by no means easy. But the lack of space to talk about it freely – to just be me, a person with mental illness, without everyone getting awkward, without the expectation that I should hide or cure this part of me – has been the most difficult part. Over a period of time I stopped obsessing about getting rid of my illness and I started seeing it as an acceptable part of my identity. This is when it became an experience rather than a burden. An experience with good and bad aspects to it, just like every other human experience. I stopped hating myself for being me and I realised that it’s not my problem if other people feel awkward about who I am. I’m not talking about making lemonade with life’s lemons. The difficulties that come with mental illness won’t disappear with an attitude change or by chucking a positive spin on it. Nor am I saying that people shouldn’t recover from mental illness. This is about disengaging from the fight against myself and accepting mental illness as a valid and worthy part of my identity.’ – Maggie Gibson, Writer

‘I still don’t know who I am exactly. I probably will never know and I will probably continue to search for my identity for the rest of my life. But I think that’s the coolest thing about being alive! My identity constantly changes; sometimes I don’t like who I am and sometimes I love me. Identity is not a gender, a sexuality or an age. Identity to me should not be measured on any scale or defined by anyone because identity has everything to do with constantly learning and nothing to do with achieving anything.’
– Dom Fox, Writer