the naked truth: why do we have to be nude to be heard? 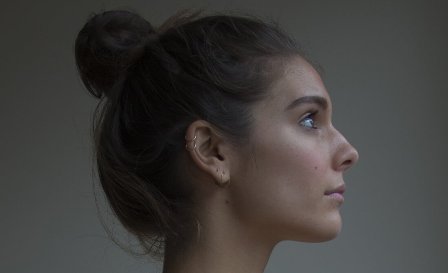 Photo by Jennifer Toole on herself.com

What do former Neighbours star Caitlin Stasey, a sex worker, and a breast cancer sufferer all have in common?

They are all posing nude and baring their bodies for feminist website, herself.com (NSFW).

Herself.com, which was launched by Stasey in January, invites women from across the globe to share their views and individual experiences on different topics ranging from sex and sexuality, the female body, reproductive rights, feminism, and religion.

The website acts like an interactive photo board where you select an image of a woman and are then directed to that particular woman’s interview. Just like their bodies, each woman’s story is unique and reveals a breadth of experiences. This supports the broader idea that society shouldn’t be looking at women through one standard lens, and that women can be both subject and object without being sexualised and vilified.

The frankness of their words combined with the beauty and aesthetics of each image creates openness and invites you to consider their truths and how they relate to your own.

At herself.com, there is literally nothing to hide. The website offers a positive environment for women to regain a sense of ownership of their bodies from those who Stasey says ‘seek to profit from [our] insecurity.’

We’ve seen throughout history women using their bodies as a vehicle to express an idea or a message. It is no longer shocking to us when we see women walking bare chested in the streets for SlutWalk or celebrities posing nude in PETA ad campaigns. But why is it that a woman’s story can only be told when exposing parts of herself or “baring it all?”

Why is the physical body still the primary narrative tool in a woman’s storytelling toolbox?

Last year, Bruce Willis’ and Demi Moore’s youngest daughter, Tallulah Willis stripped off for an online web series called What’s Underneath Project by StyleLikeU.com. The video is about Willis’ experience of living with body dysmorphia. It starts with her sitting hunched on a barstool, fully clothed. She is then prompted with questions from an unseen interviewer, to which she responds and removes an item of clothing. By the end of the interview she is sitting in her bra and underpants, with her pile of clothes sitting on the ground beside her, symbolising that there is nothing left to tell.

Another project called the 365 Day Project is a series of photographs of women and their children wearing nothing but their underwear. Geelong mother Maddison Gore created the project to ‘celebrate the post-partum body’ and empower women to ‘love their body after having a baby, embracing every mark, scar, stretch mark, flabby bits, saggy bit and learn to love to themselves.’

The project was published into a flipbook/calendar featuring over 450 local Geelong women, all of whom were considered brave for sharing the physical changes associated with pregnancy, and all the nitty gritty that comes with it.

Then there was the #nomakeupselfies campaign for #cancerawareness, where women all over the world posted images of themselves without makeup on different social media sites. Status updates and tweets accompanying the images all reflected a similar feeling of unease at exposing their natural form, suggesting that women are still not comfortable in their own skin despite attempts to free the female body of the traditional social representations of femininity.

Yet these campaigns and websites are not created to denigrate women, but liberate them. At herself.com, how the female body is viewed and how it is experienced are presented as two very different things, yet they come together through each woman’s stories.

In some ways, herself.com still presents the female body as an object; it is something to be viewed and used as a narrative tool. The difference is that it is the women themselves telling their stories, not the mainstream media whose narrative of the female experience is limited to being thin, white and heterosexual.The idea of having to change or mould yourself to suit a certain social ideal has no place, and there is no room for shame, just a little bit of truth.