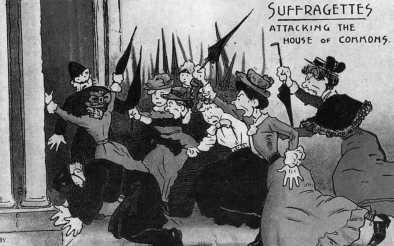 In my last column, I wrote about some of the interesting material sent to me via Google alerts. Google alerts is a function that can send you anything written about a particular topic on the internet. Not long after this column was on Lip, the alert proved to be even more useful as I discovered an anti-feminist I knew nothing about: Ernest Belfort Bax.

When Bax’s The Fraud of Feminism was published in 1913, English suffragettes were still arguing for their right to vote and literally putting their bodies on the line. The writing of Bax shows how such a gentleman from the gentlemanly classes (in other words, the upper classes) understood feminism and his ideas were the concrete that many a rickety anti-feminist argument was and has been laid.

So what does Bax actually say about the social movement he believes is a fraud? Near the start of the book, he writes that feminism is illogical and contradictory. In an instant such a statement makes it unlikely anything good can emerge from feminism. The illogicality of feminism, according to Bax, comes from its desire for equality with men and for its hope that women will enter public life and be able to vote. However, Bax believes that such feminist wants are arguments that actually create inequality. He believes that before feminism, the law treated women and men equally until feminists started arguing how the law should be changed. I’m certainly no legal scholar but I don’t see how my property remaining my property after marriage creates inequality! Bax seems entirely of the belief that women used the law against men and the law in turn discriminated against men simply because they were men. When discussing the first divorce laws in 1857 he goes on to say: ‘the whole power of the State is practically at the disposal of woman to coerce and oppress men’ which he relates to both criminal and civil matters.

Bax also says women are naturally inferior to men, while men are naturally superior. In almost all anti-feminist rhetoric, the use of nature and “natural differences” is something used as a stopper to any feminist argument that tries to manoeuvre around it. It is quite an effective argument — I haven’t seen one anti-feminist argument not grounded in the idea of the natural. This applies to arguments used in the late nineteenth century through to the present day.

If, as Bax believes, women are inferior yet capable of using the law to discriminate against men because of feminism, then to many anti-feminists this proves how dangerous, potent and powerful feminism can be. No doubt this would have scared many anti-feminists as the fear of imminent change would have been a present reminder that maybe the world was not as stable as they believed.