the spoils of war: ANZAC day, war and the military rape of women 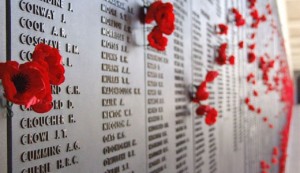 On ANZAC day, it seems pertinent to point out that this is a tradition that exemplifies the masculine aspect of Australian culture and history.  In high school, my sociology and psychology teacher enacted a social thought experiment, asking us to draw a picture of our conceptualisation of “A Quintessential Australian”. In a class of thirty young adults I was the only person to depict my Australian as a woman. People drew bushrangers, swagmen, male indigenous Australians (in terrible tribal stereotypes), surfers, “bogans” and other stereotypical depictions of the Aussie Bloke archetype. This is Australia. This is Australian culture.

Although around 51% of the population is female or woman-identified, Australian cultural pastimes exude a male ethos. The central values of “Australian-ness” are concepts of the “Fair Go” (as long as you’re a white Aussie bloke who likes sheilas) and “Mateship” (Maaaaaate!). These are all stereotypes which may not be as relevant today, but come Australia Day or ANZAC Day these old generalisations bubble up from the cultural-historical ooze, along with the Southern Cross symbology, Australian flag thongs, cork hats and other articulations of patriotism.

Throughout my public school primary education nearly every year from as soon as we could read and write, we were taught about Australian history and culture, even if it was as basic as colouring in a flag, a map or a vegemite label. We had ANZAC and Remembrance Day observations in which the minute silence, for a hyperactive tomboy eight-year-old, seemed like the agony of war itself. Through all this I didn’t learn much at all about women’s place in Australian history apart from the fact that it was women, like my grandma, who baked Anzac cookies which were sent to soldiers in the war.

When we commemorate soldiers as the fallen heroes of war, though a legitimate and necessary practice, it is largely forgotten that women are also major victims of war. In 1998 at a conference in El Salvador, Hilary Clinton said: ‘Women have always been the primary victims of war. Women lose their husbands, fathers, their sons in combat. Women often have to flee from the only homes they have ever known. Women are often the refugees from conflict and sometimes, more frequently in today’s warfare, victims. Women are often left with the responsibility, alone, of raising children’.

My grandfather died from a heart attack caused by the mental illness he developed from his experiences serving in the navy during the Second World War. When my grandfather died my dad was only sixteen. My grandma was left a widow, never re-marrying. The effects upon the experiences, emotional structure and individual subjectivities of my dad’s side of the family have been profoundly shaped to this day by what happened to my grandfather. But it was my grandma who pulled everyone together.

War has the most tragic impact on women in that throughout history military conquest has been almost inseparable from mass rape. Saint Augustine stated that rape in war is an ‘ancient and customary evil.’ When a military body invades another nation it seems to go without saying that the women of the attacked culture will be raped. ‘Rape and pillage’, since the dawn of civilisation, from the Vikings to US occupation of Iraq and Afghanistan. In 2008, the UN Security Council described rape as a strategic ‘weapon of war,’ and that it is. Women’s bodies symbolise the culture of a civilisation, and by their literal penetration and defilement, an attacking force symbolically infiltrates the attacked nation causing not only individual trauma for the women raped, but widespread social despair.

In the 1970s-80s women controversially demonstrated on ANZAC day to raise awareness of the impact of war rape on women. These protests were met with scorn from RSLs and authorities, claiming that feminists were sullying the honour of Our Nation’s Heroes. When we use the words “Lest We Forget” we must use them to include not only men who fought for our country, but also the women everywhere throughout history, long before Gallipoli, who have fallen prey to war, which Jocelynne Scutt describes as ‘a madness of a particularly male kind.’

3 thoughts on “the spoils of war: ANZAC day, war and the military rape of women”