thoughts on ‘full frontal feminism’ and changing your last name 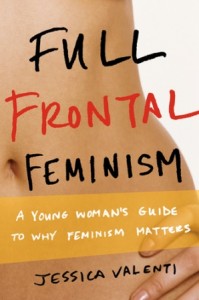 Right now, I’m reading Full Frontal Feminism, by Jessica Valenti, the founder of Feministing. I’m not entirely sure how I feel about it – on the one hand, I find it a very accessible read, especially for younger feminists or for people who are first starting to get into feminism and who find a lot of the academic texts dry and confusing. I’ve spoken before about how overly academic books can be alienating and exclusionary, so I’m glad this book is none of those things.

On the other, there are certain issues Valenti brings up that I entirely disagree with. Which is fine, not everyone within the feminist movement has to agree with everyone else. We’re a very large group after all and dissenting opinions are allowed! I would say encouraged even – I’m coming from a relatively sheltered and privileged viewpoint and my bugbears are going to be entirely different coming from someone from a different background. I am always open to learning new things and questioning my viewpoints. I don’t think we know everything there is to know, after all.

One particular viewpoint I disagree with, and one that has been brought up on lip before is the issue of changing your last name when you get married. People who are against it find it antiquated and sexist – it comes from viewing women as property rather than as individuals with their own lives and bodies. I don’t entirely disagree with the sentiment. If I ever got married I don’t believe I would change my name and if I had children, I’d want them to have my last name. I have a deep attachment to my last name and I want to honour my relatives who have been discriminated against because of it.

Also, because my older brother does not plan to have children, I have this notion of carrying on the name. Which I recognise comes from patriarchal society – just because my brother does not plan on having children does not mean the name “dies” out with the last man standing. But I find it a nice thing to do for my family. I would not want my father to walk me down the aisle or give me away; I am not his, so I figure this is another way to honour the name and him. Of course, this is all very hypothetical – I am nowhere near married or engaged and a long way off from having children (if I even do).

If our definitions of feminism also include choice, then I accept that some women will want to change their last names. Maybe they have no particular attachment to it. Maybe they have very bad associations with their name. Maybe they find their last name embarrassing. I think, predominantly (correct me if I’m wrong) the last name most women have has come from their father anyway, so they are still within the patriarchal society, yet have had no choice in the matter. I think, if we get married, we have the choice. It may still be buying into the dominant paradigm, but the recognition of it is an important step and what people choose to do with themselves and their bodies is their own choice, not mine.