waleed aly and the daryush valizadeh saga: why i won’t ‘click something else’ 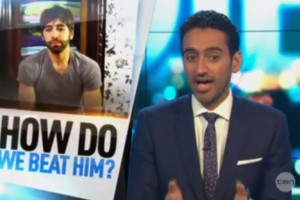 As I’m sure you’ve seen by now, pro-rape Men’s Rights Activist group Return of Kings have decided to hold face-to-face meetings across Australia. ‘Tribal Meetings’ (Yes, that’s what they call them) are planned in Sydney, Brisbane, Melbourne and Perth. Their international leader Daryush Valizadeh (AKA Roosh V) has also decided to come specifically to Canberra and meet the ‘unmet need’ for group in our capital city. Understandably outraged, women of Australia took to social media to voice our disgust.

Recently, well-known social commentator and TV presenter Waleed Aly encouraged us to stop talking about Valizadeh on social media, saying we were eating out of his hands by giving him free publicity. The solution, we’re told, is to click on a link to a women’s shelter and donate money there instead of voicing our concern on social media, to channel our feminist rage into giving money to organisations to feel better.

Don’t get me wrong, his intentions were well-meaning. As someone who works for a homeless women’s organization and provides direct assistance to women (many of whom are homeless due to domestic violence), I have absolutely no issue with people giving money to good organisations helping women. However, this is not about those organisations. These organisations respond to the crisis and provide a tiny Band-Aid to the massive wound left from domestic violence, sexual assault and the very real consequences of an Australia too afraid to confront its issues with toxic masculinity. Sometimes, we need to address the social context this violence occurs in and it is that opportunity for discussion that we miss if we ‘click something else’.

One Canberra-based feminist took to Change.org to create a petition to ask Immigration Minister Peter Dutton to refuse the visa of Valizadeh on the basis that his statements insight violence against women – the same argument used to block his colleague and ‘Pick Up Artist’ Julien Blanc last year. The petition received more than 65,0000 signatures in 24 hours. It prompted Mr Dutton to ask for a formal briefing on Valizadeh and his intention to travel to Australia, who then issued a statement that should Valizadeh attempt to apply for a visa, it would most likely be denied. A petition started by a passionate young woman in Canberra prompted politicians to action. It was met with a wave of media coverage and statements from leading politicians at all levels of Government deploring violence against women in all of its forms and calling for the end of misogyny and homophobia. A clear message that these types of attitudes are not welcomed in Australia is an end in and of itself. It was a good moment for young feminists in Australia but it would not have been possible without the use of social media.

Valizadeh’s comments are so extreme that, if anything, they are an easy target. But it’s also an opportunity for us to see some leadership on the fight against misogyny from our political leaders and from our police services. After all, the ‘tribal meetings’ will still go ahead in many parts of Australia even if Valizadeh is unable to enter the country. This is not just about fighting one American man with a fringe view; it is an opportunity for Australia to shine a mirror on its own misogyny and condemn violence against women in all its forms.

We should not distract ourselves by simply giving money to women’s shelters and hoping Australia’s problem with toxic masculinity will simply disappear. This is not the solution. Discussion, debate and reflection will get us one step closer. So sorry, Waleed, but I won’t stay silent this time.