why I can’t vote republican: an open letter 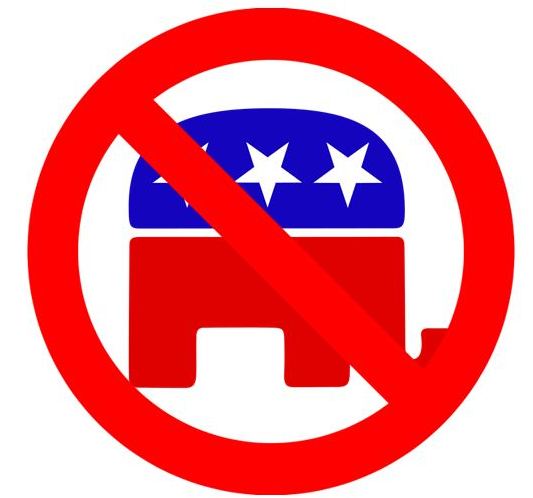 I can’t vote for a Republican candidate for president. I know that this fact surprised you at dinner last night and caused a small argument. Your thoughts on how you don’t think that climate change is a problem really frustrated me – I kind of felt like Galileo arguing that the earth revolves around the sun – and so, I got to thinking about how I could convey to you why I can’t vote for a Republican. There are many reasons why I feel alienated from your political party.

I know that we rarely ever talk about politics. I purposely avoid certain topics, because I know that you and I will disagree. So first, I should state that I am neither a Democrat nor a Republican. I’ve never really been either. Although I grew up hearing your political perspective, I didn’t fully understand the implications of some of your beliefs or what it means to be a Republican or a Democrat until university. There I learnt that, on the political compass, my thoughts and beliefs are more similar to people like the Dalai Lama and Nelson Mandela. Also, I learnt to look at all sides of an issue. The world is not black and white, and so when it comes time to vote for someone – whether they be a candidate at the national or local level of government – I try to find out as much as I can about all candidates and make my decision based on how much we have in common rather than based solely on party lines.

Unfortunately, explaining in detail what I think and feel about every problem and issue in the world and why my beliefs do not currently align with the Republican party would go beyond the scope of this letter. So, I am going to discuss many an issue that greatly affects my own life: women’s rights.

Over the last five years or so, the Republican party has done a number of things to its own image that have made it difficult for me to relate to its candidates. Many of the solutions that Republican politicians advocate for do not align with my thoughts and beliefs. Social issues are very important to me, especially those that relate to women’s rights, but Republicans have made a number of remarks that alienate me and other women from voting for them. For example:

‘If a woman has (the right to abortion), why shouldn’t a man be free to use his superior strength to force himself on a woman? At least the rapist’s pursuit of sexual freedom doesn’t (in most cases) result in anyone’s death.’
– Lawrence E. Lockman, Republican member of the Maine House of Representatives since 2012

‘If we took away women’s right to vote, we’d never have to worry about another Democrat president. It’s kind of a pipe dream, it’s a personal fantasy of mine, but I don’t think it’s going to happen. And it is a good way of making the point that women are voting so stupidly, at least single women.’
– Ann Coulter, Political Commentator

‘This contraceptive thing, my gosh, my gosh, it’s so…inexpensive. Back in my days, they used Bayer aspirin for contraceptives. The gals put it between their knees, and it wasn’t that costly.’
– Foster Friess, Political Philanthropist

‘What does it say about the college coed Susan Fluke, who goes before a congressional committee and essentially says that she must be paid to have sex? What does that make her? It makes her a slut, right? It makes her a prostitute. She wants to be paid to have sex. She’s having so much sex she can’t afford the contraception. She wants you and me and the taxpayers to pay her to have sex. What does that make us? We’re the pimps. The johns, that’s right. We would be the johns—no! We’re not the johns. Well—yeah, that’s right. Pimp’s not the right word. Okay, so, she’s not a slut. She’s round-heeled. I take it back.’
– Rush Limbaugh, Radio Host

‘If it’s a legitimate rape, the female body has ways of shutting that whole thing down.’
– Todd Akin, former U.S. Representative for Missouri’s 2nd congressional district (2001-2013)

‘Understand though, that when we talk about exceptions, we talk about rape, incest, health of a woman, life of a woman. Life of the woman is not an exception.’
– Joe Walsh, former U.S. Representative for Illinois’ 8th congressional district (2011-2013)

‘If the Democrats want to insult the women of America by making them believe that they are helpless without Uncle Sugar coming in and providing for them a prescription each month for birth control because they cannot control their libido or their reproductive system without the help of the government, then so be it.’
– Mike Huckabee, former 44th Governor of Arkansas (1996–2007) and candidate in the 2008 United States Republican presidential primaries

This is only a small sample of the types of remarks that seem so common lately and make it nearly impossible for me to feel safe supporting a Republican candidate. I am a woman, just like Sandra Fluke. I believe that women should have access to affordable health care and birth control. When Rush Limbaugh called Sandra Fluke a slut – or as he later described her, ‘round-heeled’ – not only was he slut-shaming, but he was also calling people like me a slut. I don’t think that you would appreciate any man calling your daughter a slut. I simply want to have control over my own body and destiny, just like every person in this world. No person – including my father, my partner, and especially not a stranger who lives thousands of miles away and who will never truly know me – should be allowed to make decisions about how I live my life or what I do with my body. Access to adequate health care is a human right, as stated in Article 25 of the Universal Declaration of Human Rights. And yet, there have been times that I’ve foregone going to the doctor for my annual gynaecological exam and pap test in order to save money.

You know, I was very lucky that you and Mum taught me that all people are created equal and that I can do anything that I set my mind to, even if what I choose to do doesn’t align with what society defines as an acceptable role for a woman. Unfortunately, when I moved out of the artificial safety of suburbia to the big city, I encountered quite a shock: not everyone believes these truths to be self-evident, and there are quite a few people in the world who are misogynists.

I’ve never told you about some of my initial experiences moving to the city, because I don’t really like to talk about it. Don’t get me wrong, I love the city! But I’ve encountered my fair share of street harassment and sexual harassment since moving away.

For instance, I was once called the ‘c-word’ by a man when I didn’t give him my number and refused to go out on a date with him. I was once followed, honked at, and propositioned by a man in a car every morning on my way to work for at least a month until I changed my schedule and left the house a half an hour earlier than I needed to. I’ve even had to shout at a number of leering men that I’m married just to get them to leave me alone. Of course, I am actually happily married, as you know, so telling them so is not a lie. But it is just a little sad that in this day and age I have to flash the rings on my left ring finger and tell them that I’m married just to get them to take no for an answer. Undoubtedly, some of these men must believe that women are submissive to men, that they belong to men, even though it is the year 2015.

These types of encounters make me feel scared. They are humiliating. And sometimes, they lower my confidence and make me question if I truly am just that worthless. So when politicians make similar public statements – statements that are clearly ignorant and misogynistic – about women, our rights (or lack thereof), and our role in society, how can I possibly be persuaded to put my trust in these individuals and vote for them?

Of course, not all Republicans agree with these ignorant and misogynistic statements, many of which were made by previous candidates during the 2012 presidential election. But the legislation that has been passed – or not passed – by Republicans in Congress over the last couple of years also influences my reluctance to vote for a Republican. For example, Republicans in Congress continue to refuse to pass the Women’s Equality Act, and recently, in Tennessee, Republicans passed an anti-abortion amendment, which puts all pregnant women in danger, including those who wish to be pregnant.

Similar to the ignorant remarks made by many Republican candidates, I could make a long list of all the legislation that has been passed or ignored mostly by Republicans that negatively impact women’s rights. Fortunately, the American Civil Liberties Union maintains a feed of all the latest news and policy changes that affect and hinder women’s rights, if you are interested in reading more.

Unfortunately, there are also some other reasons why I can’t vote for a Republican candidate right now, including their views on science and climate change, their stances on LGBT rights, and their insistence on including creationism in public school curriculum, only to name a few.

But the issue of women’s rights is especially close to home for me.

One thought on “why I can’t vote republican: an open letter”