why is sexism so entrenched in Indian society? reflections on the recent gang-rape case in delhi 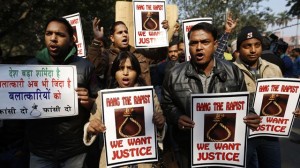 Pavithra Sagar is  a 25-year old female corporate writer and editor living in Tamil Nadu. Here, she discusses rape and casual sexism in India, in the aftermath of the recent horrific gang-rape case in Delhi, and sends a message to fellow Indian women.

Along with millions of Indians, I have been in turn shocked and outraged at the rape and murder of the 23-year old Delhi-ite named ‘Damini’ by some media outlets, appalled by the subsequent display of rank sexism by our leaders and frustrated with the underwhelming political and judicial response. This week, it has been reported that the youngest gang-rapist who allegedly ‘ripped the victim’s intestines out with his hands‘ may evade a harsh sentence as he is a minor. The implication of this happening is horrifying, although symptomatic of the very circumstances that led to the rape in the first place.

There have been many debates and discussions recently, examining the rampant institutional misogyny in India. Of particular relevance in understanding how a ‘modern’ democracy like India still condones and encourages violence towards women, is a cogent interview with feminist author Gloria Steinem. She explains that the origins of male violence towards women ‘come in a very deep sense from teaching men to dominate. If you’re going to have a male dominant system, to maintain the system, you have to teach men to dominate.’ Conversely, the system also encourages women to be passive and subservient, to be victims to the patriarchal status quo.

Indian women have lived under the patriarchal system of our society for so many centuries that today sexism has become normalized. Interwoven into our culture is the belief that women have a second-class status in society; that we are disposable, exploitable and abusable. This is obvious in the high rates of female infanticide, dowry deaths, domestic violence and marital rape. According to an International Men and Gender Equality Survey, more than 65% of Indian men believe that sometimes women deserve to be beaten.

Casual sexism is all too pervasive in popular culture. Simply put, men are told that in order to be men, they must be superior to women. Films and television soaps promote this by reinforcing gender stereotypes. While men play the hero, women are given traditional submissive roles of the doting mother, passive wife, the item girl or the damsel in distress. On the big screen, heroines are automatically and unquestioningly assumed to be inferior. This lack of respect makes it a lot easier for men to treat women with violence.

It is also commonplace for Indian cinema to teach men how to practice physical, psychological, economical and sexual violence. For example, romantic wooing is almost synonymous with incessant harassment. The danger is in the message – that eventually after the continuous harassment, the woman will eventually succumb. In many movies, men leer, whistle at, and pass comments on women who pass them by. Regurgitated into real life, these actions become culturally sanctioned, and almost all women become victims of everyday sexual harassment, euphemistically termed “eve-teasing”.

In other movies or television series’, women are not allowed control of their bodies, their reproductive abilities, much less their lives. A woman is rarely portrayed as independent. In the rare event that a woman is depicted as free and self-governing, such as Deepika Padukone’s character in Cocktail, the male protagonist chooses the traditional and reserved girl over her. In this manner, a woman is usually seen as a daughter to be married, a wife cooking in the kitchen or a commodity that the hero comes to possess. For instance, in the recently released Tamil movie Podaa Podi, the male protagonist upon realizing that he is a traditionalist husband who wants his wife to be homebound taking care of children, impregnates his wife so that she will not be able to continue with her dancing career. Although this seems far-fetched while blatantly misogynistic, the director Vignesh Shivan defended the sexist storyline with a misogynistic attitude saying ‘at the end of the day what a girl does is she will accept it and say “ok fine”. For them more than the goal, more than the aim and whatever they pursue, they just go for whatever a boy wants. Girls just leave everything for their love’ (source).

Most Indian films do not treat rape as an act of violence and domination, but instead as an assault on a woman’s chastity. In Indian society, this becomes an act of shame for the woman, because it has made her unfit for marriage. In most cases, this discourages women from pressing charges against the rapist or making a court case, and in this manner rape is perpetuated as an escapable crime.

Sexism is a deeply learned behavior with a thousand manifestations and while casual sexism may seem trivial, it plays an integral part in upholding patriarchal values. When women dare to challenge the status quo they are met with opposition. ‘When you stand up for yourself and try to be autonomous and self-determining, you’re called a lot of names that we all know and that are very common’ expounds Steinem. ‘You may lose your job. You may lose custody of your child. You may be blamed for the failure of your marriage even though it was the man who couldn’t tolerate an equal relationship. If you are beaten, you’re said to have incited it. If you’re raped, you’re said to have invited it. I mean we all know these things that are very deep in the culture.’

The first step in discouraging violence is imaging, according to Steinem. As sexism is a learnt behavior, cultural socialization must change. Boys have long been taught that ‘it’s masculine to be dominant and girls…taught that it’s feminine to be dominated or to be passive’ she says. It is important for popular culture to stop reinforcing the same tired gender stereotypes. Part of this is to change our language. Victim-blaming is a common occurrence in our society. Only just recently, self-described ‘spiritual guru’ Asaram Bapu said that the Delhi rape victim was partly responsible for her own attack. A spokesman for the leader added that though the leader’s comments were insensitive, ‘if she would have taken God’s name or recited a mantra God inside her might have suggested to her how to avoid such crimes.’ As Steinem says ‘We have to stop talking about how many women are raped, and we have to talk about how many men rape. It’s the, we use these passive verbs all the time as if it happened by magic. Someone did it. And we have to identify that someone. And everything we know tells us that they only begin to take it seriously when there are very serious consequences for their acts.’

In the short-term, legal changes are obviously indispensable. Making rape a non-bailable offense and implementing harsher sentences for sexual assault immediately would be a start. The Indian Government has been considering The Protection of Women against Sexual Harassment at Workplace Bill since 2010. It has yet to be passed by the Rajya Sabha.

Stay outraged. Realize that the rape in Delhi could easily have occurred to you. This tragedy must not fade from our national consciousness as we did with the 2012 Guwahati molestation case. Pressure the national government to follow-through on legal overhauls that focus on penalizing rapists and sexual assault instead of shifting the onus of being safe from rape and sexual assault onto women. Use the discussion and debate about India’s patriarchal system to challenge the sexism prevalent in our society. If we’re lucky, by the time our children are grown-up, they’ll recognize and condemn casual sexism when they see it and we can finally stop having to listen to our elected officials explain that despite withdrawing their statements, they actually believe that raping women is wrong. We cannot will ourselves to go back to sleep.

8 thoughts on “why is sexism so entrenched in Indian society? reflections on the recent gang-rape case in delhi”