would you wear these tights as an anti-rape device? 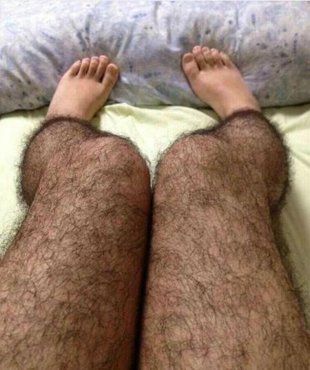 An image originating from China’s version of Twitter of what appears to be a woman wearing hairy leg tights, which are intended to protect women from perverts, hit the internet by storm this week.

Described as ‘super sexy, summertime anti-pervert full-leg-of-hair stockings, essential for all young girls going out’, it’s not actually clear whether this anti-rape product is an actual thing, but the image itself has spread like wildfire.

And to be honest, I spent the better part of last night feeling entirely infuriated at the online response to such a product, even if only speculated to be real.

‘These stockings, which are made to look like a pair of very hairy legs, induce groans, nausea, and physical discomfort,’ said Alexander Abad-Santos at The Atlantic Wire.

Bit over the top, don’t you think?

‘It made me cringe… that’s a chick’, says wii12News broadcaster, Nicole Ducouer. ‘It’s so gross to look at, but they’re saying it works against perverts’. To which her colleague, Michelle Kennedy replies, ‘Yeah, no, that’s just ridiculous… I think that’s part of a great Halloween costume, other than that, no thanks.’

So, if it looked good and possibly prevented perverts, you might consider it?

‘Sure, maybe less people will be interested after seeing those ape legs, but you’ve got to be really nervous about the Pandora’s Box of people you’ve just made interested,’ said Patrick Jones at Buzz 60.

Yeah, if it won’t deter all creeps, why bother at all?

And one from a particularly enlightened commenter, ‘This will not only prevent against perverts, it’ll definitely also result in preventing handsome guys from approaching you’.

Way to emphasise a harsh stereotypical view on beauty and human attraction.

Granted there’s little credibility that they’d work (though judging by the comments above, it’s reasonably easy to gauge how you might be greeted in public if you decided to rock a pair), and I can see the side that it’s not very appealing, even in a fashion sense, to whip on a pair of stockings covered in fake hair when a lot of us shave our legs to make them smooth and silky in the first place. But the thought has most definitely lingered that it might be taken a little more seriously if it fit the status quo just a little better.  Because ultimately, the issue being overlooked here is that rape culture is becoming such a part of society that products are being developed and marketed to protect against it.

Earlier this year, student engineers in India came up with a concept for anti-rape lingerie designed to give high voltage electric shocks of 3800 kilovolts activated by unwanted touch to the bosom and completely controlled by the wearer. But I guess that’s a little more “normal” than wearing than a pair of hairy legs, because unwanted sexual attention only comes to women with smooth and shaved legs and, of course, rape only happens to women who dress provocatively…

I almost want to find myself a pair just to spite these jerky comments, and whether or not they are a real pervert-deterring aid, I think the biggest issue is the explosive reaction to something really quite petty.

4 thoughts on “would you wear these tights as an anti-rape device?”