violence against women: take the oath on white ribbon day 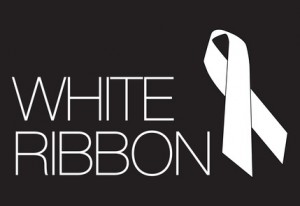 In the afternoon of December 6th 1989 in Montreal, a man massacred 14 of his female classmates. From this horrific action, a nation was brought to the forefront of an issue that had been severely underreported for too long.

Physical and sexual abuse against women is one of the most widespread forms of violence worldwide. In 2000, the United Nations Statistics Division documented that in some African countries, more than half of all women and girls have undergone female genital mutilation and its prevalence is increasing. Women and girls comprise half of the world’s refugees and, as refugees, are particularly vulnerable to sexual violence while in flight, in camps, and during resettlement. What’s more, women are subject to rape, domestic violence and other forms of violence, and the scale and true nature of the issue is often hidden.

To bring it a little closer to home, in Australia, 1 in 5 women are victims of household violence, and intimate partner violence is the leading contributor to death, disability and illness in Victorian women aged 15 to 44 (VicHealth 2004).

Two years after the massacre in Montreal, a handful of men in Toronto, Canada, believed they had a responsibility to create awareness to stop men’s violence against women. As a result, the White Ribbon Campaign in Canada became an awareness-raising event held annually between November 25th and December 6th. In December 1999, the United Nations General Assembly declared November 25th as the International Day for the Elimination of Violence Against Women, adopting the white ribbon as its symbol.

In Australia, White Ribbon Day began in 2003 and is the country’s only national male-led violence prevention campaign. It believes that ‘the prevention of violence against women will change society for the better.’

While this type of violence is an intensely personal issue for women, involvement of the men in our society is just as important in creating awareness because it is their mothers, sisters, daughters, wives and friends who are harmed by the abuse. It is a men’s issue because if men can speak out against violent acts committed by a minority of their peers, the likelihood of stopping it is greater.

This Friday November 25th, swear never to commit, excuse or remain silent about violence against women. By purchasing any White Ribbon merchandise you are supporting primary prevention initiatives to stop the violence.

To learn more about the campaign or to purchase a white ribbon, visit White Ribbon online at www.whiteribbon.org.au/

2 thoughts on “violence against women: take the oath on white ribbon day”