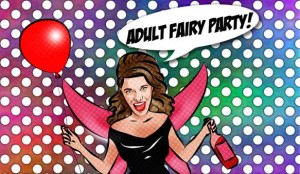 A children’s party for adults.

What better way to evoke your inner child than by dressing up in glitter and flocculent wings! The Adult Fairy Party, a comical cabaret hosted at the The Butterfly Club in Melbourne, contrasts the stark reality of adulthood to childhood dreams and fantasies. By engaging the audience in an array of magic, balloon animals, party games and face painting, comedy cabaret artist Natasha York has the crowd in splits. It’s almost like a real children’s party, only no children are allowed.

With the audience donned in fairy attire, the surreal and cushy semblance emanating in the club set the mood for the show to precede. A handful of candy fused with a fully stocked bar, facilitated the contrasting theme of the Adult Fairy Party.

The show explores the life choices of the performer that has led her to become a ‘real life modern fairy’. By entwining her previous experience as a children’s entertainer with her contemporary adult fairy ensemble, ‘Fairy Tash’ exposes what it really means to grow up. Figments and reveries are replaced by the reality of adulthood.

‘Fairy Tash’ dons the stage as a modern fairy in high heeled boots, sipping a glass of wine. By engaging the audience in lively, interactive children’s party games like Simon Says, Pin the Tail on the Donkey and Pass The Parcel, a part of childhood memories are relived. But these party games are spruced up with a twist to make them compatible to adult taste. The fairy getups combined with awkward childhood games is an indicator of how ‘out of place’ you can feel in society at times.

With reworked pop tunes entwined with poems like Incy Wincy Spider, Ring Around The Rosy, the cabaret compares today’s blunt times with the innocence of childhood days. Times when littler things in life could light up your entire day and there was not a worry in the world. The simplicity and genuine joy of being a little kid is highlighted by the artist.

‘Out of reach’ childhood dreams are contrasted with the drab current lives of adults. The monotony of jobs, stressful responsibility of parents and the pleasures of wasted, drunken nights are relayed comically by the performer.

The artist is on a quest to determine if she’s a real fairy or not. The theme of ‘belief’ is induced with a Peter pan reference. What appears to be a real fairy might not be real anymore. Childhood beliefs are shattered and replaced with logic. Growing up is not a fun process but at the end of the day, you know it’s worth it.

Natasha goes on to face paint well known childhood cartoon figures. By relating childhood experiences with the audience’s current job and lifestyle, Natasha performs hilarious impromptu musicals. The face painting session divulges a message conveying that what you wanted to be in childhood is radically different from how you actually turned out to be. Children are so sure of what they want to become in the imminent future but adults lack this surety because they are affected by reality.

In the final musical, the talented songstress lifts spirits high by instilling a note of hope. The beauty of childhood: to wish, dream the impossible and fly unattainable heights confidently is emphasised. Being an adult also has its perks as long as you are attune with your inner child.  A wonderful cabaret that first starts out as a fun, comical show turns out to mean so much more. It’s not so bad being grown up after all!